Even though I rarely listen to Depeche these days, they’ve meant a great deal to me for over 20 years. My first experience of Depeche was the vinyl records of “Speak & Spell” and “Construction Time Again” in the early eighties. After the somewhat disappointing Exciter album they returned four years later with an album last autumn.

I remember seeing Dave Gahan with the grunge beard on the Devotional Tour 1993, a dark concert where the audience went crazy, as well as the the insane opening act of Singles Tour 1998 where the concert started in full throttle with “A question of time”. This time, much was different.

Only a few meters from the stage, I saw with my own eyes how they’ve grown older. But even though they can’t even entirely keep up with their old hits, they manage to make us believe that they actually have fun on stage. Martin sported an archangel hat and even smiled a few times. Unfortunately the songs from the new album were better on record, since they didn’t really do it for the live audience.

They also performed a lot of classic songs which started a wave of nostalgia through the aging audience, especially in the unavoidable wave of “Never let me down again” where 23 000 arms were waving in the air. The concert ended with Dave kissing Martin on the forehead, while singing “Goodnight Lovers” together on the catwalk, an unifying gesture on several levels. But the best moment of the evening was Martin performing “Shake the disease” by himself. 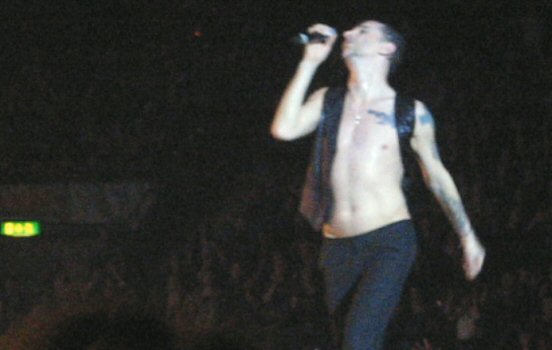 Reach out and touch Dave.

And for those who just can’t get enough, Depeche will feature the song “Suffer well” in the add-on to The Sims 2, where they will sing in the Sims language Simlish! Have a look at the animated video, which even features manikins of the Basildon trio! Hilarious.