This weekend I had the pleasure of attending the Travel Slideshow Tour by Henry Rollins. The venue was DR Koncerthuset, a nice building in the Ørestad area of Copenhagen.

After listening to handpicked music featuring Iggy Pop and similar bands, Henry Rollins arrived on the appointed time, to the very second. I like punctuality. It’s the fourth time I see Henry live, but this time was special since the focus was on showcasing photographs from his travels.

To me, Henry’s travel stories are usually the highlight in his shows. This time he described in detail how he traveled on the Trans–Siberian railway in the cold month of February. He stayed alone in a first class cabin and I enjoyed seeing his photographs which brought back memories from my own Trans–Siberian adventure. 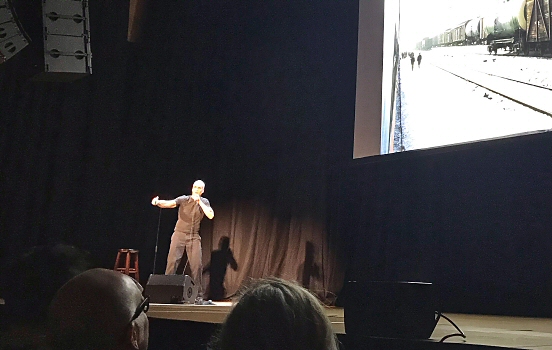 There is not a dull moment as he swiftly moves on to describe his journey to the desert music festival in Mali, where he was surrounded by camels in the audience, and how he avoided “death by hippos” in the water on the way to the festival.

Since he travel to unusual destinations and have a different agenda than most tourists, the locals tend to wonder who he is and why he has arrived. Henry is always curious of other people and their stories. Combined with his manic demeanor, this often leads to hilarious conversations, such as this one:

Henry has a keen eye for story-telling vehicles as he always focus on non-tourist photo objects to conveying emotions. You will find no sunset shots of the Eiffel tower in his collections. Instead you may find a heartbreaking story about a family looking for food among the garbage piles in India, or random happy kids playing soccer in a remote village in Africa.

Other photographs he displayed were from helicopter journeys in Afghanistan, penguins in Antarctica (his agent told him “these penguins get more action than you do”) and strangers in Sudan. At one time he found a street vendor in Indonesia selling a Black Flag t-shirt, so he tried without success to describe the irony of the situation to her.

The very last photo was of a young Henry with a skateboard, at the time of his audition to Black Flag. “I’m not talented, just lucky”, as he chose to put it.

Fortunately the Danes were polite this evening, unlike the last time I saw Henry when a drunk Swede started to argue with him.

If you are interested in Henry’s travel photography, check out his book Occupants from 2011. Many of the photos he displayed on the show are included in the book.