Here we go again for another year at Way Out West. I think it’s the 8th time I visit the festival and it’s getting a bit predictive, but there were a few new additions to explore.

One of these were the aptly named Wine Garden, placed in a cozy setting away from the buzz (or as good as it gets when there are crazy kids singing karaoke in the Red Bull tent a few years outside the garden). Had a chat with my favorite bartender from Basque and tried some nice orange wine. Another new addition was the Chef’s Market section, where I found bao buns and other nice stuff.

But since it’s primarily a music festival (or so I keep telling myself each year), I stormed away to have a look at it all. Passing Blood Orange without a second glance down to see David August from the first row, which was quite nice. 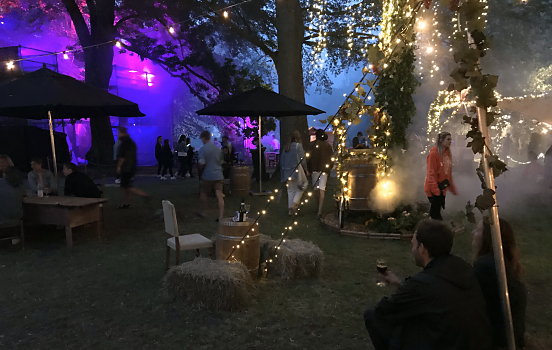 Next up was Neneh Cherry, always a safe bet even though the band managed to wreck Buffalo Stance. 12 years ago I had a unfortunate episode with her siblings Titiyo and Eagle-Eye Cherry at Berns while attending a Neneh gig, I sure hope they don’t recognize me after all this time.

Another bittersweet reunion was the concert with Spiritualized. 26 years ago, they were warmup for Depeche Mode in Gothenburg and I hated every minute of it. Apparently I was not alone in that regard, since they actually left the tour after that concert due to “downright hostile reactions” of the Depeche Mode fans (to be replaced by Swedish band Cane’n’Able as an emergency standin). This time they were almost as bad and didn’t look at the audience for a single second.

The sun sets and it’s getting crowded, as roughly 25 000 people roam the forest. I noticed that the karaoke area was unusually crowded. Of course I shrugged like Statler and Waldorf in The Muppet Show and moved on, but I later read that the commotion was due to a sudden appearance by Johanna Söderberg from First Aid Kit. I bet my chestnut falafel tops all that. 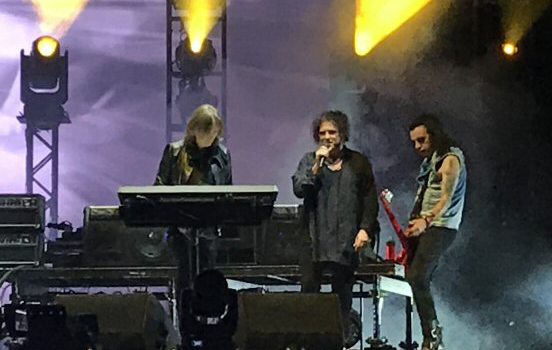 Robert Smith and The Cure.

The main attraction for me this year was The Cure. They did a great concert, much better than their infamous marathon gig in Scandinavium 2016. Robert Smith turned out to be in a great mood, slipped a giggle and took a few small dance steps. Likely high as a kite, but the rendition of Burn was particularly good.

20 years ago, I saw the band Fosca live. Their main hit is called It’s Going to End in Tears. To paraphrase them, all I know of Way Out West is that it’s going to end in rain. And this year was certainly no exception to that rule. On the last day, the flood gates were opened and the entire forest was drenched in rain all day long. The news headlines warned of heavy rain chaos, so I brought everything I got to survive in terms of warm clothing. First stop was a hot coffee at Höjden, then I was ready. I passed by the horrible Stormzy down to Maribou State in the Linné tent, which turned out to be the best gig of the day. Great singing by Holly Walkers.

The forest is lovely in sunny weather, but quickly turns into a lethal trap of mud during the traditional heavy rainfall. So we wisely escaped the drenched scenery and took a tram to Pustervik to see Stella Donnelly, an unexpectedly foul-mouthed Australian singer which was a welcome change from all the politically correct things that is going on in the main festival area. As I had mud stains up to my knees, it’s fortunate that most of the crowd looked equally messy.