Due to the pandemic, it’s the first Way Out West to be held in three years time. Last time was 2019, which featured a lot of rain and not too many exciting bands (at least according to this old grumpy).

But this year the sun was shining all the time and it felt like a heat record for the festival. Especially the Linné tent was dangerously hot and people in the audience were reported to have fainted early on day one.

A lot of people tried to squeeze into the tent where Swedish electronica wizards Kite were playing, making it feel like a moist meat grinder. After this year the arrangers should really have a talk about this stage, it is bordering on dangerous in the current format.

The theme of the year seemed to be British rap, which is really not my cup of tea. Fortunately Way Out West is so much more than just music, so I roamed the area and soaked up the ambience of 25 000 people who were just happy to be at a festival once again after the dark years.

I saw an unexpected amount (two) of Einstürzende Neubauten tshirts in the crowd, perhaps due to The Bad Seeds connection to Blixa Bargeld. I think in all the nine times I’ve visited the festival I’ve only seen a grand total of three Neubauten merch (myself included), so this was a nice surprise.

I had a look at the usual strange mix of bands, from Scottish oldtimers Arab Strap to the surprisingly energetic Beabadoobee, but of course there was only one band that I was really looking forward to: Nick Cave & The Bad Seeds. 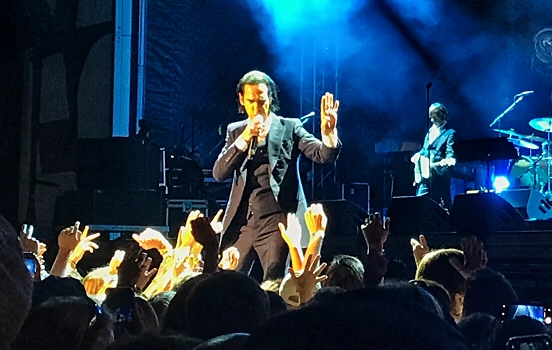 Nick Cave preaching to the crowd.

Last time I saw Nick Cave was way back in 2008 with his band Grinderman at this very same location. This time he brought the proper Bad Seeds, and it was magnificent.

Cave is certainly getting older and his last decade has been filled with sorrow, which of course is reflected in his music. It was an inspiring blend of somber notes and preaching energy which only a few artists on the planet is capable of. The setlist was amazing with songs ranging from debut album From Her To Eternity (1984) to Ghosteen (2019), spanning a highly versatile career.