Finally it’s time for the 29th Gothenburg Film Festival! Me and the love started with a humble booking of six movies this time, but judging from past years there will be additional bookings as soon as the first buzz reviews reach my pointy ears. 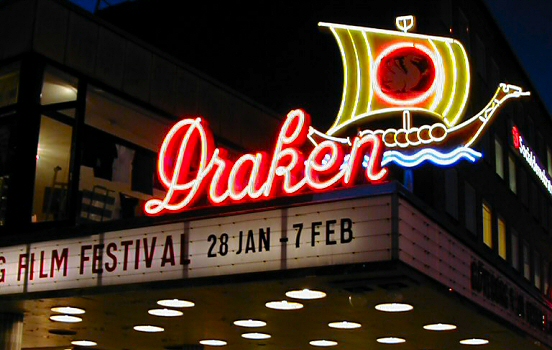 The venerable cinema Draken in Gothenburg, which is the hub of the festival.

It’s certainly looking good so far: As the lights dimmed to start the first movie a couple of hours ago, film critic Nils-Petter Sundgren entered and hurried up the steps. If he’s around, the film can’t be all bad.

An additional bonus with this festival instead of ordinary cinemas is the No Bullshit Concept – no commercials before the film, no dudes arriving fifteen minutes into the movie and squeezing past everyone to the seats in the middle, no buzzing teenagers in the audience, no crunching of bacon snacks with open mouth, no subtitle reading for the kids and almost no cellphones ringing.

Just the good stuff which enables you to escape the burdens of the world for a few hours.