Apart from these easy and obvious manipulations, there’s also the trick of a green screen, allowing “on location”-scenes without the actors even leaving the studio. It used to be an obvious trick, but these days it is extremely hard to discover any traces of it. For example, have a look at the movie in my earlier entry The magic of green screen.

But sometimes the prejudices are handled with humor. One of my favorite deliberate misconceptions is the depiction of Bratislava from Eurotrip. Four friends accidentally arrive in Bratislava instead of Berlin, which is portrayed as a war zone and comically feeds on all possible kinds of prejudices against Eastern Europe.

Sometimes the prejudice come quite close to reality, as in Snatch where Avi arrives at US customs after a trip to London:
“Anything to declare?”
“Yeah. Don’t go to England.”
Later followed up by “Yes, London. You know: fish, chips, cup ‘o tea, bad food, worse weather, Mary fucking Poppins…” which caused chuckles from the three Swedes at a cinema in London, and embarrassed silence from the rest of the audience.

But sometimes reality exceeds fiction. Have a look at this tourism shot for Cleveland. It’s probably the worst travel inspiration I’ve ever seen since the Bratislava pun. They shot it in midtown during a dull and gray day and even though it’s meant as a joke, I will never ever go to Cleveland now. :) 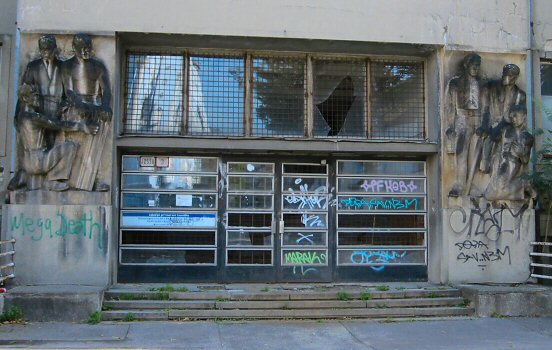 Another classic scene is from Rules of Attraction where Victor plunges through entire Europe. It’s like a collection of the best and worst of Europe put on fast forward.

That scene is of course pure fiction, but if you like the concept, check out these videos where it’s made in real world: Denver to Singapore (and back) in 5 minutes by David DAngelo and Melbourne To London with a Wideangle Lens by Tom Blachford, or why not the solemn Voyage by Marco Aslan.

My advice is to use your own senses on location. Improvise, have fun and don’t be discouraged if it’s raining!