The time had come to visit the overpriced frenzy of Way Out West. It turned out to be just as I thought it would be.

On one hand, it’s quite comfy to visit a festival at the heart of your home town. At any time you can walk home to your own bed instead of crawling across the mud into a ravaged tent. On the other hand, this fact unfortunately also turns the festival into a very calm and somewhat boring place.

It is also a very heavily sponsored festival attempting to maintain a strong ethical conscience, which effectively puts a lid on the usual festival ruckus. At times it felt like a live version of a commercial where everyone is supposed to look young and happy in the sunset.

A strange thing was that even though the Way Out West area is smaller than the Arvika compound (including camping areas), I ran into fewer familiar faces at Way Out West compared to Arvika where I bump into them all the time. Maybe it was due to the fact that Way Out West had sold 24000 tickets and Arvika only 18000, so it was quite a lot of people. Even though the park is sealed off, I wonder how the park’s natural residents feel about all this, including the flamingos, fur seals and more.

Oh, I saw a bunch of bands as well. It was fun to see Nick Cave live, even though it was his new project Grinderman. Sigur Ros made a beautiful but predictable concert. Franz Ferdinand, Neil Young, Sonic Youth and Lykke Li were fun as well. 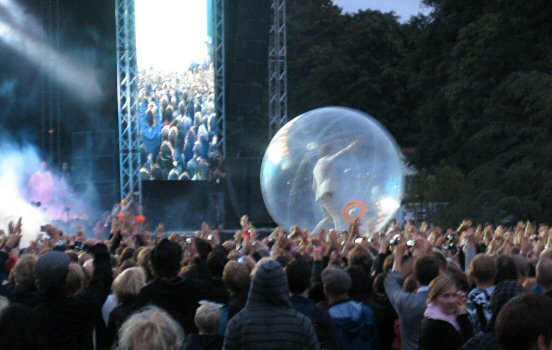 The Flaming Lips at Way Out West.

The funniest concert was held by The Flaming Lips, who brought a bunch of teletubbies on stage and the charismatic singer Wayne Coyne crowd-surfed inside a giant ball.

Finally the skies opened during the last concert of Broder Daniel, lamenting the loss of their friend and guitarist Anders Göthberg, as well as hiding the tears and running mascara of the very young crowd up front. The concert ended with Henrik Berggren performing No Time For Us alone on stage, with the final words “Farewell, my children”. Farewell, indeed.