Even though I released a book earlier this year called Here Be No Dragons, I must confess that I do enjoy a good dragon or two. So I found myself going up the steep dirt road in Sani Pass in a jeep to look for them.

The surrounding mountain range aptly named Drakensberg (Dragon’s Mountain) is said to have inspired J.R.R. Tolkien himself in his descriptions of Middle Earth, so what better place to look for dragons than this?

The road was not for the faint of heart. After an hour I felt like being stuck inside a drink shaker. The 4×4 jeep was pushed to its limits but continued stoically onward through an endless number of hairpin turns of rock and gravel. Some of the sharp turns even have names, such as Devil’s Corner, Suicide Bend and Hairpin Bend. We stopped on a plateau about half-way up to have a sip of Bells whisky, adhering to the local tradition.

Driving through Sani Pass to Drakensberg.

The route up Sani Pass starts at 1544 meters and it climbs up to 2876 meters at the summit. At the top of the pass we finally crossed into Lesotho, one of those tiny countries that many people have never heard of. The entire country lies entirely above 1000 meters in elevation, making it the world’s highest-altitude nation.

The border station felt like a remote outpost. As I got out of the car, the wind hit me in the face like a fist from Ivan Drago. Two sheep were lazily observing me from a few meters away. Even though the border proceedings were fairly fast, I wouldn’t recommend using the facilities. 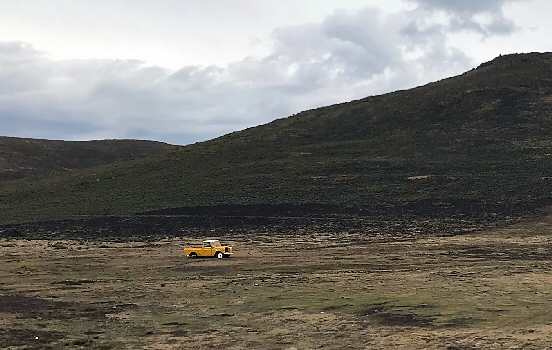 Off the grid in eastern Lesotho.

Only two of the roads leading into the country are made of concrete, fortunately we were driving on one of them. As I surveyed the landscape, it felt like crossing a plateau. The eastern part of Lesotho is a very barren landscape, since it is above the tree limit.

We stopped at a Basotho village. The Basotho are an ethnic group who speak Sesotho. As we ate homemade bread inside a hut, they described their daily life without electricity or running water. I felt so much gratitude to meet them and learn of their story.