Things to do in Cape Town

As the pandemic is starting to lighten its grip for some areas in the world, many armchair travelers such as myself smell the morning air once again (does it smell of jet fuel?).

One of the most interesting places I’ve visited in recent years is Cape Town. Few cities has such a alluring combination of beautiful surroundings, exciting food and lots of history (even though much of the latter is a sad story). It’s called the Mother City for a reason. 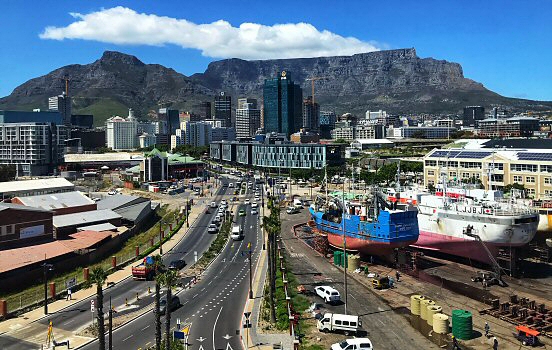 But first a word of caution. Many areas of Cape Town have a bad reputation and it’s wise to keep this in mind. Even popular areas such as Long Street can be dodgy, so keep it down a bit and don’t flash your bling.

There is no way to escape the mountain. It can be seen from almost every corner and the mountain itself is to the city what the Eiffel tower is to Paris.

Take the rotating (!) cable car to the top and wander along the edge for a magnificent view of the city below. 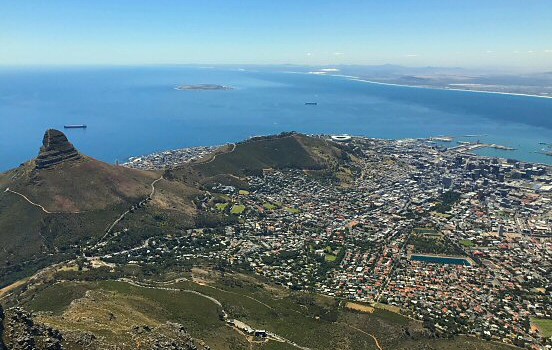 View from Table Mountain with City Bowl with Lion’s Head and Robben Island in the distance.

Note that there often are very long queues of standing in the relentless sun, so prepare accordingly. Perhaps start the day with a hefty breakfast, such as a large bowl of local Pap (porridge of white corn maize).

Also note that it can get quite cold at the top, so be prepared for that as well. Around most areas of the town, you will feel the “Cape Doctor”, the wind from the ocean that blows away all the filth.

On the eastern slope of the mountain you will find the beautiful Kirstenbosch Botanical Gardens. It is possible to walk across the mountain, there are paths but I wouldn’t recommend it.

A visit could easily take half a day, since the area is quite large. The gardens feature a great variety of plants. Some scenes from Cape Town Cops featuring Forest Whitaker was shot here. Rest your weary feet at the Tea Room.

Just be reminded that you’re not in Kansas anymore. Even among the elevated walkways such as the one below, there are signs with warning for boomslangs (very nasty venomous snakes that can be up to two meters long). 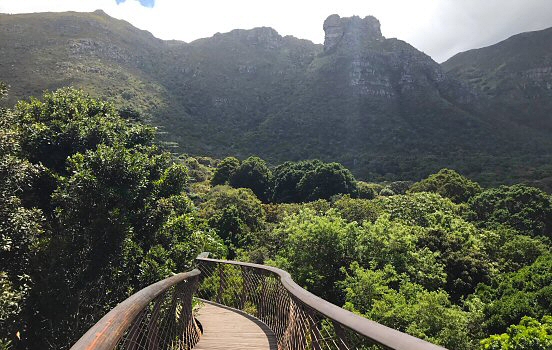 The infamous prison island is if course a very important part of the nation’s history. The atrocities of the past is a sad experience, but an important one. While waiting for the ferry, step inside the contour of Mandela’s cell at the pier as a taste of the real deal.

On my visit, previous prisoners guided us to the premises and told us chilling tales of their time there. Had a look at the tiny cell of Nelson Mandela, where he spent 18 years of his life confined to 2×2 meters.

Take a walk in Bo-Kaap, a neighborhood of brightly colored buildings. Formerly known as the Malay Quarter, the area on the slopes of Signal Hill is a historical center of Cape Malay culture. Perhaps visit a museum or art gallery?

Stop by nearby Long Street for drinks or food. Be aware that the area is infamous for seedy bars and you might want to watch out for shady characters. Mama Africa is a popular place to eat, and there are of course lots of bars. For instance, there is one with the easy name Beer House (223 Long Street), which have an impressive amount of craft beer taps and a nice terrace. Try the local breweries Devil’s Peak och Jack Black. . 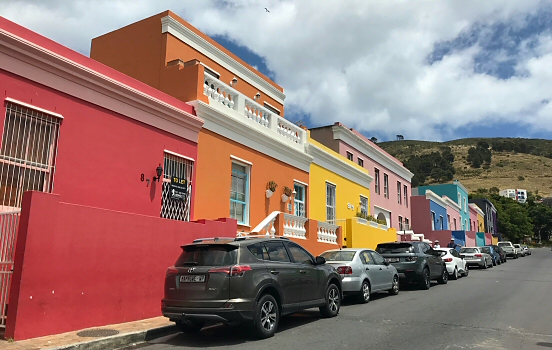 There are many interesting museums where you can learn more about the history and culture of South Africa. One of them is Castle of Good Hope. It was built 350 years ago to defend the city, but has never been used for that purpose. 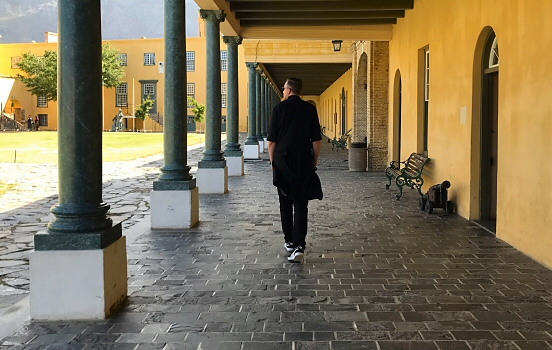 Exploring the Castle of Good Hope.

This is a very touristy area, but it is also one of the safest places in Cape Town. Unlike most other parts of town, in Waterfront you can wander relatively at ease.

Sample mysterious cookies at V&A Food Market, say hello to the poor sharks in the Aquarium or go for a sunset cruise. If you’re feeling adventurous, ride a rib boat in the harbor at your own risk (great fun, but you need to hold on very tight).

The restaurant Den Anker close to the Market is where Jennifer Connelly spoke on the phone in the ending of movie Blood Diamond (2007). 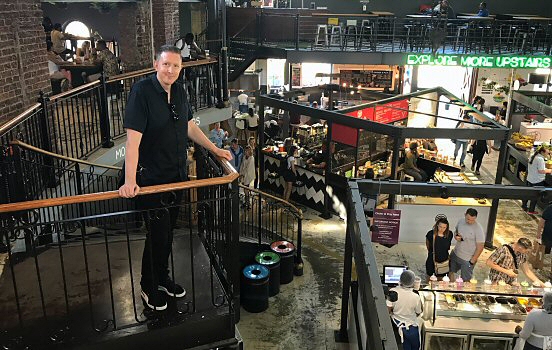 Ah yes, the Cape of Good Hope. The legendary home of The Flying Dutchman, but also widely believed to be the very southernmost edge of the African continent. As it turns out, that title is actually held by Cape Agulhas a bit further east. But it’s still a nice place to visit, with dramatic clashes of the Atlantic and Indian ocean.

Simons Town is a cozy town a bit south of Cape Town. The main draw are the adorable penguins at Boulder Beach. On the way back I recommend the scenic road along the west side of Chapman’s Peak.

Camps Bay is a suburb where the main draw is the beautiful beach with fine white sand. Several posh restaurants line up along the beach promenade. 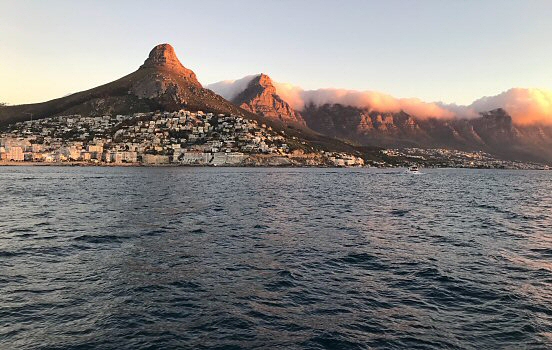 Off the coast at Camps Bay.

The beach at Bloubergstrand, another movie location from Cape Town Cops where Orlando Bloom faces off against some thugs. 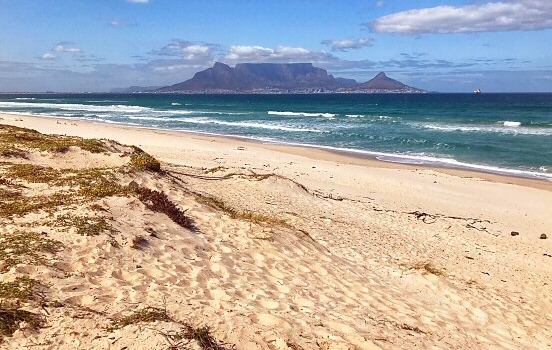 The beach at Bloubergstrand.

South Africa is famous for its wine production. Groot Constantia, the oldest vineyard in the country with their award-winning Sauvignon Blanc, is relatively close to the city.

Even further away are the renowned wine districts with charming towns. Franschhoek is very small but there are some gems. I recommend the lunch at Bowine, where tasting glasses goes well with the meal (and their Don Pedro is amazing as dessert).

Stellenbosch is also very nice, one of the most picturesque towns in the country. 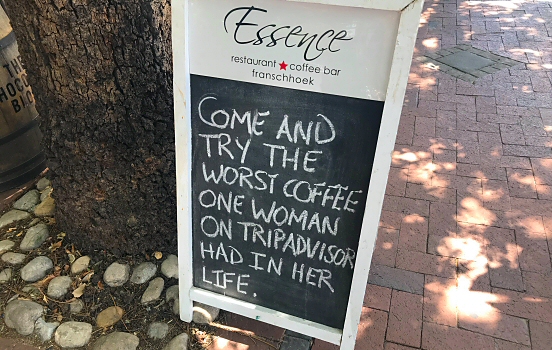 All this is of course just the proverbial tip of the iceberg. Cape Town is really an amazing place to visit!