Historically there has been always been a steady increase on connectivity. This has led to all sorts of innovation and progress. Michael Stillwell presented a chart describing the time it took for news of a specific event to reach London. For instance, news of the Battle of Trafalgar in 1805 took 17 days, compared to news of the assassination of Alexander II in 1881 which only took half a day.

What do you do if you want to know the birth date of Abraham Lincoln? You most likely google it. A few seconds later you know the answer and a lot more about the president. But a mere fifteen years ago, we looked it up at a library or perhaps in a dusty encyclopedia book if we had one nearby.

Each day, about 100 billion clicks are made on a web of HTML pages due to 55 trillion links. That amount of links almost match the synaptic wirings of the human brain, but unlike the brain, the web double its capacity every two years.

Google has just updated their indexing machine, calling the new system Caffeine. This has been in the works since last summer. To honor its name, the index is refreshed much faster than before. Or should I say more often, since the word fast is a bit relative when it comes to Google.

In the eyes of Google all sites are created equal

Some time ago a bunch of newspapers demanded to get a higher search rank from Google. The reason was that they didn’t master even the simplest of SEO (search engine optimization) skills and thus wanted to be given a free-ride in pagerank. Nice try, insert coin.

Three years ago I wrote about how some guys with lots of time drove around in San Francisco, shooting millions of street-level photos. With a bit of Ajax you could explore the city and maybe even do some window-browsing. 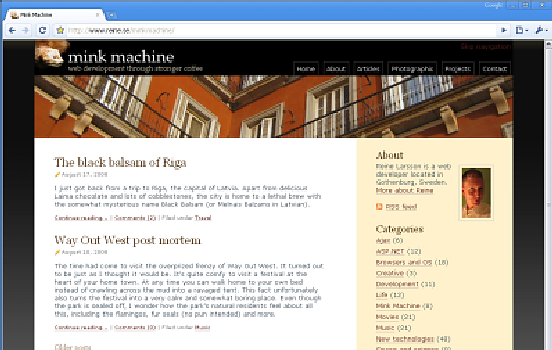