Microsoft are not often mentioned in the same space with great design. But after decades of horrible menus and option dialogs something seems to stir at Redmond. Several images of the new user interface called “Ribbon” for Office 2007 have started to appear on blogs. It seems that Microsoft is moving away from the traditional pull-down menus of endless options, and instead grouping the options in tabs. Hopefully they will leave the annoying paper clip assistant out in the cold.

Compare this with the evolution of Google. They have an absolute focus on minimalism and that’s one of the reasons I started to love their search engine all those years ago. After a while their algorithms were better than the competition, but by that time I was already hooked on the interface. If I visit a search engine, it’s because I want to search for something. I don’t want to drown in the ads at AltaVista, I just need a search field to type my query. Ten points to Google.

Another interesting company in the same trend is 37signals. They move against the stream by adding less. This enable them to focus on the core and making it really good, instead of adding twenty mediocre features, just to keep up with the competitors software upgrades.

Most software developers eventually feel the urge to design interfaces, and unfortunately a lot of them do. The chance is that they end up with something like this example from Excel: 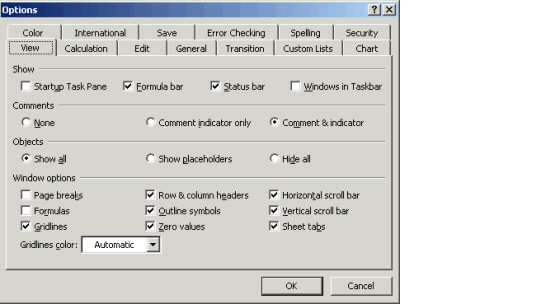 And when the designer is on vacation, something like this may happen over night in the cubicle trenches:

Know your limits, but if you’re doing the interface anyway, try to make an effort. They are meant to be used and intuitively understood by normal users, not Neo. To quote Charles Mingus: “Making the simple complicated is commonplace; making the complicated simple, awesomely simple, that’s creativity.”