It was a misty night in Kiev. We left the large Sophia Square, where the golden domes of Saint Sophia Cathedral and Saint Michael’s Cathedral normally are visible. But even the imposing cathedrals were lost to the nothingness of the mist, so we chose another path and went down the Andriyivskyy Descent.

Andriyivskyy Descent is a historic street in the capital, winding its way from upper town along 720 meters of cobblestone down to the Podil area by the harbor. In summertime the street is bustling with people and vendor booths, but tonight there are only a few scattered shadows in the darkness. 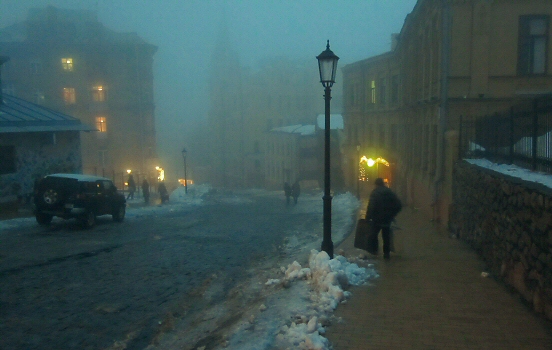 One of the first things one see during the descent is Saint Andrew’s Church. The beautiful green cupolas topped with gold are seen from a great distance. Except for tonight, when you barely can see your own shoes. The church was initiated by the Russian Tsaress Elizabeth Petrovna, laying the first brick in the 1750s.

We passed the sitting statue of poet Taras Shevchenko and arrived at the so called Castle of Richard Lionheart. It’s a strange name since the building has nothing to do with the English king. Instead we made a quick pitstop for a pint of Obolon, brewed in northern Kiev. 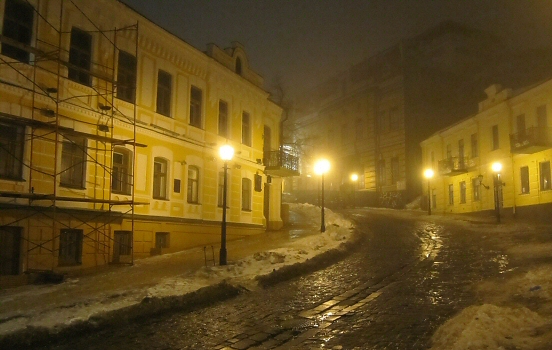 A bit further down the street we arrive at the address 13 Andriyivskyy Descent, also known as the Bulgakov House. The writer Mikhail Bulgakov lived in this house for a while and described the area in his novel The White Guard from 1925. There is a statue of the famous author sitting on a bench next to the house. 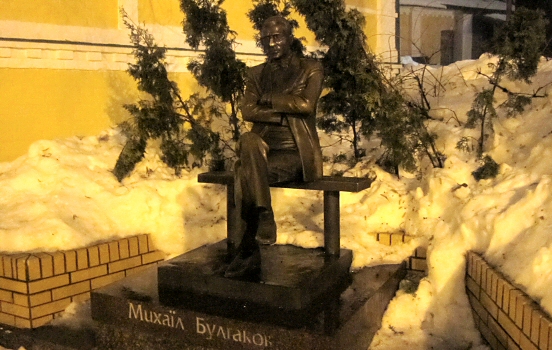 We finally arrived at the Podil area as the street flattens out. We needed to get out of the cold and dry our shoes somewhere, so fortunately we managed to find a restaurant that is still open. I decided to go all in and ordered a Chicken Kiev, to complete the culture immersion.