For the last decade, many seems have succumbed to the neural addiction of social media. Users are expected to be endlessly scrolling their feeds, or “doomscrolling” as it is often being referred to.

It’s not unlike a slot machine, where people tend to pull the lever “just one more time”. The imagined reward might be high, but the instant increase in dopamine is likely much more desired. The theories of gamification is often put to clever use in most modern applications and sites.

One might get that idea since no actual money is needed for subscription fees or creating content, and ads are just something in the corner of the eye that we’ve become increasingly good at ignoring. But actually, the currency is your attention.

In a world of infinite attention stealers, focus is the key to your well-being. Unfortunately, it is also hard currency for social media agencies. You might think you got it all under control. We all do. But to paraphrase Emperor Palpatine, your feeble skills are no match for the dark side of social media.

On the other side of your screen are a small army of psychologically trained experts, who are leveraging clever algorithms based on your own statistical data to provide you with exactly the kind of content that makes you scroll just a bit more. Or even better, makes you react strongly and engage in endless lose-lose arguments with strangers on the internet. Your rage fits perfectly into their business model.

Our attention is being stretched very thin by an abundance of information sources. The FOMO (Fear Of Missing Out) factor is very effective at keeping us in line, should we stray a little from the path. Most applications these days is lit up like a Christmas tree, drowning our senses with flashing icons and notification sounds.

It’s like a virus spreading over Facebook, Instagram, TikTok and the rest of the social platforms. But instead of the software being hacked by nefarious light-shy hackers wearing Guy Fawkes masks and black hoodies, the corporations themselves are designing the very foundation of the design around the goal to lure you in. And you use the software of your own free will, because it’s so addictive.

These days it’s more important than ever to guard your input sources and be very selective. Your inbox is a todo-list that everyone has access to. Social media is simply other people telling you what to think. It’s easy to start the day by being overly reactive, which kickstarts the slippery slope.

There is also the even more alarming issue of deliberate disinformation. Today the information landscape seems to be more about identifying and filtering false information rather than consuming source material.

The Obama administration was allegedly one of the first campaigns to utilize the power of social media. But it was the Trump campaign, headed by devious mastermind Bannon, that really put this subtle weapon to use and planted seeds of disinformation all across the internet. This is described with horrifying details in the book Mindf*ck: Cambridge Analytica and the Plot to Break America by Christopher Wylie.

The Covid pandemic turned out to be a great example of how important the online information (and disinformation) turned out to be. Today, we see how the war in Ukraine is fought even on the internet, unlike similar incidents in times past. The Kremlin appears to be behind almost a decade of cyber warfare against Ukraine, including a large virus attack (Hermetic Wiper) that was activated the day before the invasion started.

But even though these kinds of attacks are alarming, the social media outlets are arguably the largest influence factor on the population, making subtle use of disinformation into a very powerful weapon. The battle of the public eye can sway considerably using coordinated misinformation campaigns and shrewd memes. 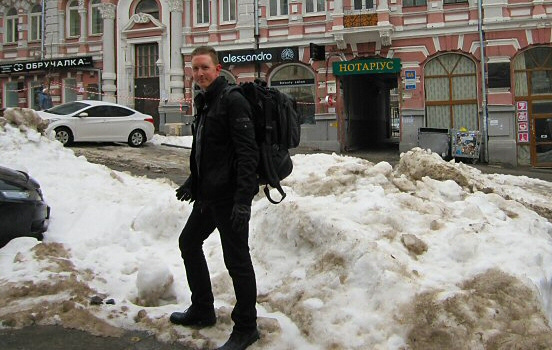 Reine going uphill in Kiev, almost a decade ago.

Social media is a very important channel for obvious reasons. Facebook has an estimated 2.9 billion active users. A decade ago, this many people weren’t even on the entire internet. Thanks to smartphones and other inventions (such as the algorithms mentioned above), the time we spend online is also increasing each year. This rapid change during the last decade is unprecedented in human history and will play a vital part in the shaping of our collective future.

Several social networks are responding strongly to the wake of disinformation and public reactions. A few days ago, Facebook made a temporary change to its hate speech policy by allowing war posts urging violence against Russian invaders, perhaps partly in response to Russia banning Facebook last week. Instagram was also recently banned, so I guess these are interesting times for influencers.

The ability to determine accuracy and reliability of online sources has never been more important. Once again, your attention is the real price.

(Yes, I do realize the irony of publishing these words on a public internet page.)

Further reading on critical thinking and focusing your mind would include Notes on a Nervous Planet by Matt Haig, Four Thousand Weeks by Oliver Burkeman, Ostörd by Gisela Bäcklander, Think again by Adam Grant and maybe even Learning to Die in the Anthropocene by Roy Scranton. (When you’re done with these books I might recommend a few episodes of the Simpsons to clear your palate of doom.)

If you’ve managed to read all this far, I salute you.