As I walked along the magnificent boulevards of Odessa, my thoughts went to its history. The city was founded by Catherine the Great in 1794, built on the foundation of previous settlements of Greeks, Tatars and Ottomans. It is said to be constructed as a bragging point, trying to create a new Saint Petersburg in the sunny south.

Regardless of the intentions, the architecture is stunning with a lot of European influences. There is a cosmopolitan nature which makes it feel very different than Kiev. 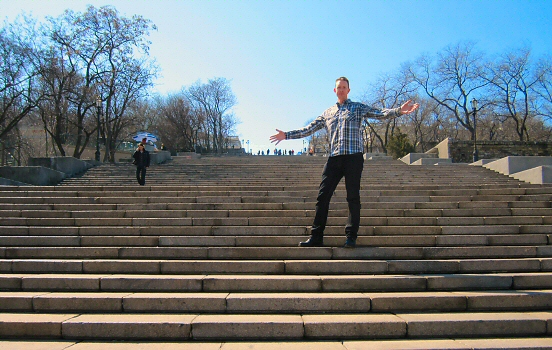 Going down the Potemkin Stairs in Odessa.

The most striking view of Odessa is of course the Potemkin Stairs. Finished in 1841, the 142 meters long stairway was immortalized in Sergei Eisenstein’s movie The Battleship Potemkin from 1925. The granite steps are the location of the unforgettable slaughter scene where Odessan citizens were murdered. Even though the actual massacre took place in nearby streets instead of the actual steps, the stairway is still an impressive location.

Mark Twain was here in 1867 and described it like this in his book The Innocents Abroad published two years later:

“A vast flight of stone steps led down to the harbor–two hundred of them, fifty feet long, and a wide landing at the bottom of every twenty. It is a noble staircase, and from a distance the people toiling up it looked like insects.”
–Mark Twain (1867) 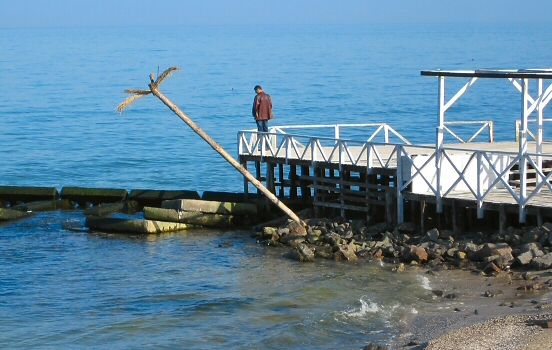 End of the line at the Black Sea.

Since the city is called “pearl of the Black Sea”, we knew where to go next. Passed the statue of Alexander Pushkin, who was exiled here in 1823, and had a pit stop for a cold bottle of Lviv before arriving at the waterfront. Walked along the sandy beach past the “yellow stone” and sat down on the pier, overlooking the distant horizon across the Black Sea.