Several names from the previous era remain in the scene. Colorful characters such as Andy Clarke, Bruce Lawson and Jeremy Keith are still here, reinforced by young and talented professionals in the field. But the war is almost over since most vendors embrace web standards today. Heck, even Microsoft are doing their part with IE9, even though that version only has partial implementation of JavaScript and CSS3 so far.

This means that the brilliant minds can focus on other stuff. But what will that be? The conference was mainly about HTML5, CSS3 and mobile development.

First we attended a full day workshop on building mobile apps, led by Jonathan Stark. There are often divided camps on whether to do pure native apps or go for web apps, but we went for hybrid apps which is web files bundled in a native executable. I like this approach, since we’re getting the best from both worlds.

But there is usually a bit of black magic involved. To keep your sanity while developing I recommend using the helper tools available. One of the most popular is PhoneGap, an open source native app wrapper which enables support for native devices such as camera and accelerator. Unfortunately PhoneGap requires XCode, which only runs on Macs. But there is a workaround where you upload the code to a server, compile it and later download the compiled files.

There was also a bit of talk about nifty plugins such as JQTouch, which provides a mobile look-and-feel GUI to your markup. I also picked up some useful gems regarding designing for touch screens which may come in handy. He ended the day with demonstrating hardcore debugging using Weinre (WEb INnspector REmote), really cool stuff! 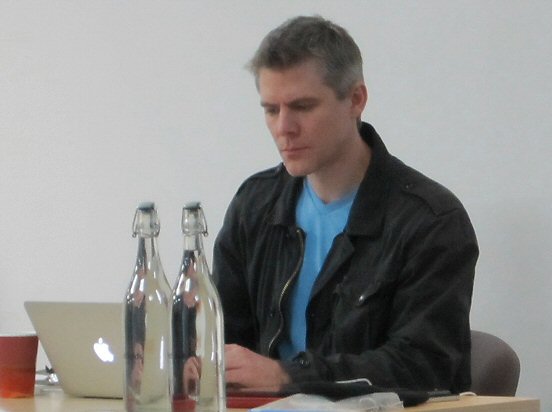 On the first conference day, Tom Coates held an inspiring keynote about the extreme rate of expansion on the web. The first HTML page was written in 1991. Present day, 20 years later, Google has indexed 28 billion web pages and digitized 15 million books (of the total 130 million). And most of the material has of course been published in the last ten years, as the nineties had a quite modest internet population compared to today.

As Tom put it, “All this magic has been happening in the last 10 years, and you’re all part of changing the world”. Ten years ago, there was no Facebook, YouTube, Twitter, RSS feeds… This is nothing new and I frequently think/talk/write about this topic, but it is still absolutely mindboggling.

One of the most anticipated sessions was Bruce Lawson on HTML5 video. He has been one of my favorite speakers for many years with his brutally honest attitude. The new <video> element is native and thus accessible by keyboard as well as controllable by JavaScript and CSS. The <track> element and vtt-files (Web Video Text Tracks) can be used for accessible subtitles. You can also use media queries to, for example, send low resolution video to mobile units:

This is a great step forward, but unfortunately the biggest problem is codec support. The different browsers have varying support for mp4/H.264, WebM, Ogg/Theora. The same problem goes for audio with formats such as mp3, Ogg/Vobis and wav. Until there is better unification we have to fix it with multiple source elements.

He noted that HTML5 seems to have severe latency issues, so it’s probably not good enough for advanced WebGL stuff, but hopefully this will be addressed soon.

Douglas Crockford, the legendary creator of JSON and more began to spoke about wicked JavaScript techniques including node.js, but somehow managed to turn it into a session of IE bashing.

Addy Osmani showed a million links to JQuery frameworks, where I think Modernizr is one of the most useful.

Lea Verou spoke about CSS3 gradients and showed some kick-ass examples. Linear, radial, you name it. Have a look at her gradient demos and view the code if you’re brave enough. The second day started with a keynote by Andy Clarke. He demonstrated Animatable, a free tool which runs in the browser and offers help while creating animations. As a demo they recreated the Mad Men intro using CSS3 transforms, transitions and animations (you need a modern browser such as latest Chrome or Safari to view it).

I also attended “Rockstar graphics with HTML5” by Dave Bulmer. A lot of canvas and CSS3 comparisons were made and he believed SVG to be on its way out.

Nicole Sullivan talked about performance of CSS3 and HTML5. A good point was that selectors are parsed from right to left, so div.classname is slower than .classname. Other things to avoid were box-shadow, rgba-transparency and the attr-selector.

Then I walked through Jubilee Gardens, said my last farewell to it and took the tube to Heathrow.