Connection07 was held at Stadsmuseet, one of the very few web conferences held in Gothenburg. Of course, compared to the large global conferences such as MIX and @media, this is a bit smaller.

On the other hand, I’ve often felt that the large conferences tend to turn a bit towards monologue due to their size. Connection07 had a smaller crowd who dared to ask relevant questions, thus turning it into a kind of two-way conversation. Dialog is always more rewarding than monologue. 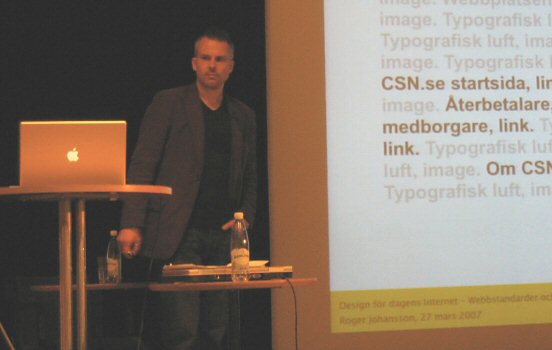 The speakers were my colleague Roger Johansson who talked about accessibility and web standards, Rasmus Sellberg who talked about the next generation of podradio.nu, Henrik Torstensson, Fredrik Wackå and Anna Grandt.

The whole thing was arranged by Jonathan and Jonas from lab:kloud9. Great idea, guys!

The only thing that I could wish for with the next Connection conference, and with all web conferences in general, is more women participants – both as speakers and audience. Even though web companies are blessed with female colleagues more often than the traditional software development companies, there is still a lot of room for improvement here.

The computer world is unfortunately by large still a man’s world, but come on – it’s 2007! Let’s change this!