Today I am in Yazd, an ancient desert city in Iran. I arrived a few days ago coming by bus from Esfahan, a magnificent modern city. The contrast is enormous, since the old town of Yazd mostly consists of sun dried mud bricks. But I must confess that the ice cream I found today was the best so far in Iran, while Esfahan had the best coffee.

It’s really an ancient town. The area is believed to have been inhabited for 7000 years! Yazd is located in the middle of the desert, so the minarets are quite tall since they functioned as landmarks for the ancient camel caravans.

I went up on the roof of a mosque and admired the roof tops. The roofscape of Yazd, in lack of a better name, is covered by badgirs. These are ingenious constructions acting as medieval air conditioning systems.

But the best thing about Yazd is the labyrinth alleys of the old town. I love getting lost in them, navigating on random while surrounded by staring old men, pointing their crooked fingers at the Godzilla Viking in surprise. It feels like I’m walking around in Mos Eisley. 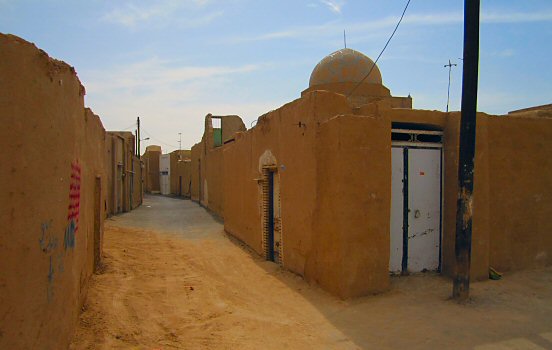 Roaming the alleys of Yazd.

Since it is located on the old Silk Road, Marco Polo passed through the town in the 13th century and described it as “very fine and splendid”, and I must agree with the old man.

There is another historical place which caught my interest. It’s called Alexander’s Prison (Zendaan-e Eskandar), named after Alexander the Great who pillaged his way through Persia in 330 BC. Inside a beautiful domed building the site turned out to be a hole in the ground, supposedly built by Alexander as a dungeon according to a poem by Hafez.