Today is the 60th birthday of Henry Rollins. It’s a cold Saturday, a perfect opportunity to stay indoors and catch up on favorite stories from Henry.

I’ve read several of his books, watched many shows on DVD and seen four live performances by Henry. He is always hilariously entertaining regardless of topic, but my favorite is hearing about his travel experiences. 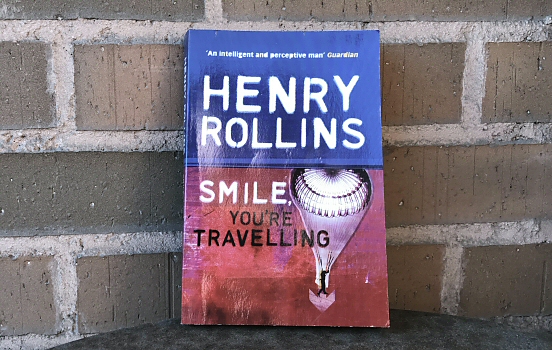 Many of his books are written in diary format, starting each paragraph or chapter with a date and location. He began writing way back while being on tours with Black Flag, taking notes of observations on the road. At first the notes were made into a fold-and-staple photocopied bunch of pages, then later made into a paperback and some decades later he is the author of lots of books.

“Smile, You’re Traveling” is the third book in the Black Coffee Blues trilogy and features excerpts from his travel journals during 1997-1998. His travel observations are intertwined with personal reflections and moody introspectives.

Several chapters deals with his first visit to Africa. He roams around in places like Kenya and Madagascar, being in awe of the animal wildlife while disapproving of other humans in sight.

He is also walking the frozen streets of Moscow, getting tired of hotel TV in Tel Aviv, smelling the pollution in Cairo, getting confused at the politeness of Tokyo citizens, disapproving radio stations in Sydney and a lot, lot more.

Many of the chapters are a whirlwind of tour dates all across Europe and the United States. He disapproves of Sweden, being “never a big fan of the place” and remarks on the “glacial privacy” of security guards in Stockholm.

Even though few people recognize him from his Black Flag days, he still stands out from the crowd and the locals often get curious to why he has come. His usual icebreaker is “I’m here to meet you”, which is probably not the answer they were expecting. I read an interview where Henry said “I just travel the world with my backpack and my cameras and a bunch of Clif bars”, which is a refreshing thought in these days when influencers only travel to Instagram-worthy locations.

As expected from his lifestyle and background, there is a lot of music connections and reflections. He writes about spending time with the band Black Sabbath, bashing MTV culture and wondering why would win in a fight between Sheryl Crow and Bruce Lee.

Being on a journal format, the book often takes twisted turns as Henry’s train of thoughts races to top speed in all directions at once. Sometimes the chapters can get very personal, delving into his feelings of loneliness and being a social outcast. These introspective chapters can sometimes be filled with remarks that are brimming with bitterness or cynicism, making the upbeat travel observations take a sharp and fast turn into difficult territories.

If you like reading about Henry’s travel experiences, I also recommend Get in the Van (1994) and Occupants (2011).