Kosovo. A mere mention of the name is enough to start a debate wherever you go in this part of the world. The war ended almost 20 years ago, but the scars still appear to be fresh.

Only recognized as a state by 60% of the world’s countries, Kosovo is still in dispute. As one of Europe’s poorest countries with high unemployment rate, as well as a taxing criminal and corruption activity, the newborn state has a lot of challenges to overcome ahead.

The monument “Newborn” in Pristina is a tribute to Kosovo’s declaration of independence.

Today I have arrived to the city of Pristina, capital of the second-youngest country in the world. Hopefully I will learn things and understand the conflict a bit better. After all, a big part of traveling is learning new things by experiencing other cultures.

After finding a sandwich next to the imposing tower of the cathedral Majke Tereze, I continue down to the National Library. It’s a very odd building, covered in some sort of metal fishing net, making it look like prison bars. 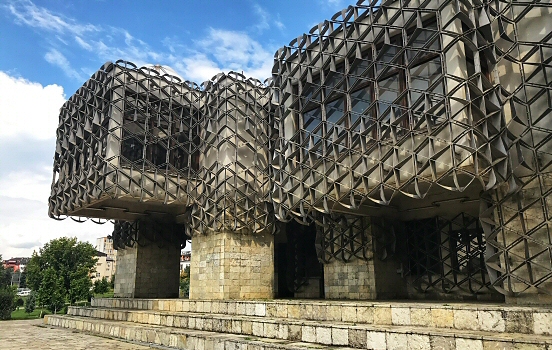 The National Library of Kosovo.

The roof is covered with 99 domes. Apparently the Croatian architect meant to blend Byzantine and Islamic forms, but I don’t really know what to say of the result. 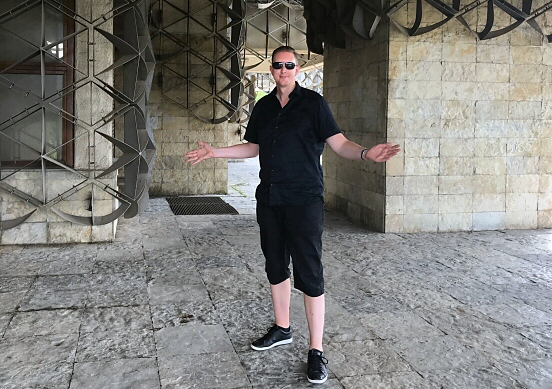 Reine at National Library of Kosovo.

This city is full of surprises. I found a statue of Bill Clinton standing next to a shop called Hillary which sold dresses. Someone has a very twisted sense of humor.