I’m back in Morocco, a decade later. But this time I’ve arrived in the gritty city of Tangier.

The old Medina is full of fascinating gates and narrow alleys, where I blend in like Moby Dick at a Nine Inch Nails concert. Under the watchful gaze of old men sipping their tea, I keep on walking along busy streets.

Entering the Medina from Grand Socco through the keyhole gate Bab Fass.

I’m following in the fictional footsteps of Jason Bourne (Bourne Ultimatum), Dom Cobb (Inception, where Tangier acted as “Mombasa, Kenya”) and James Bond (both Spectre and Living Daylights had scenes in the city), not to mention real life individuals such as William S. Burroughs who wrote Naked Lunch in the Hotel el-Muniria during the 1950s.

The rough Tangier of Burroughs’ infamous book, the “interzone” as he named it, may not be there anymore. But once you leave the open space of the Grand Socco and head into the alleys of the Medina through the keyhole gate Bab Fass, the reality is blending into fiction. 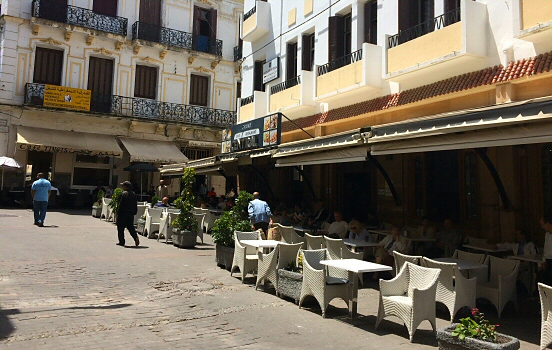 The ancient walled city dates back to the 14th century. The Petit Socco is the old heart of Tangier. Even the Romans had their forum here and all who goes to the city pass through here eventually. Today there is not much to do except to have a tea at Café Tingis with a bunch of expats (nicknamed Tangerines). I remember watching Michael Palin’s series “Sahara” many years ago, when he passed the square in 2002 and had a stop at Café Tingis. Anthony Bourdain did the same in 2013. And now I’m here. 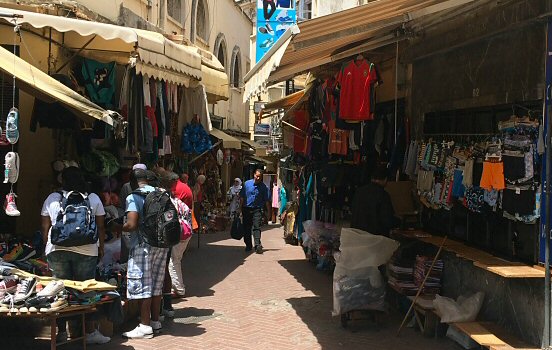 I remember the words of Mark Twain, from his visit to Tangier in 1867:

“Tangier is a foreign land if ever there was one, and the true spirit of it can never be found in any book save The Arabian Nights. Here is a packed and jammed city enclosed in a massive stone wall which is more than a thousand years old. All the houses nearly are one-and two-story, made of thick walls of stone, plastered outside, square as a dry-goods box, flat as a floor on top, no cornices, whitewashed all over — a crowded city of snowy tombs!”

A lot of things can change in 150 years, but there are still exciting sights waiting around every corner and my bucket list is long. Unfortunately the Medina has a mindset of its own regarding time and space.