The town of Bergamo is often overlooked by hordes of people flying with RyanAir to the airport of Bergamo, just to get to Milan in a cheap way. But the old town (Città Alta) is a hidden gem, perched on a high cliff with amazing views of the surrounding area. Just take the funicular and you’ll be up there in no-time. 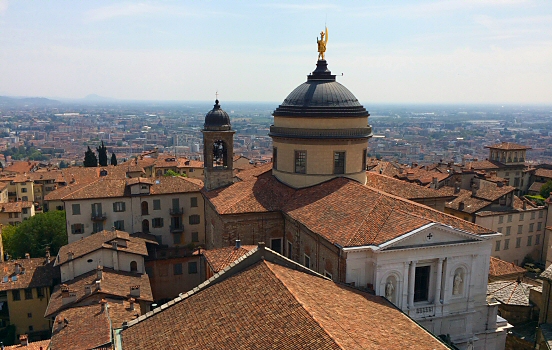 The old town with the Duomo di Bergamo.

Even the funicular in itself is interesting, since the short ride takes you through the old Venetian walls which encircles the city. They were constructed by material from the old cathedral torn down by the Venetians in 1561. I guess even Mark Twain admired them on his visit to Bergamo in 1867.

A great starting point is Piazza Vecchia, where you can decide which way to go next while the bells from the nearby bell tower create an ambient charm. I love to start my visit in a new city by getting my bearings from a high view, and there is no better place in Bergamo than the Campanone. After taking the elevator to the top of this 12th century tower, you can see all of Bergamo from every direction. Even the Fort of Bergamo (Rocca Viscontea e Torrione) is visible at a distance.

The Duomo di Bergamo (full name Cattedrale di Sant’Alessandro Martire) is just around the corner. The white facade is shining brightly and so does the spacious interior. The area has been sacred since the 5th century BC. 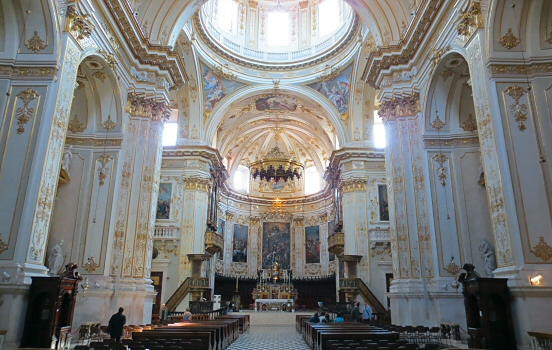 Inside the clean Duomo.

The neighbor Basilica di Santa Maria Maggiore from 1137 is the other way around, including a darker hall with a strange mix of styles and Baroque tapestries. Where the cathedral is clean and minimalist, this church is rather lavish with lots of gold and ornate details. 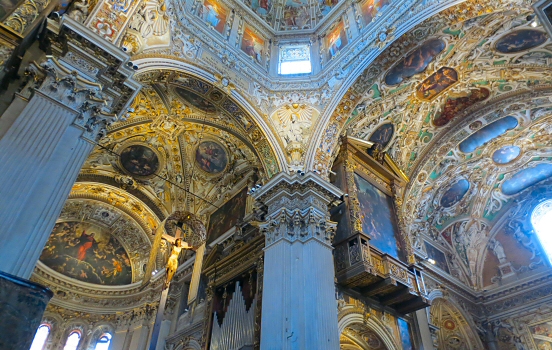 If all this wears you down, I suggest a short walk down the cobblestones of Via Bartolomeo Colleoni until you reach Piazza della Cittadella, where Osteria della Birra serves nice food with local craft beer. While sitting in their outdoor patio, you can look up on the clock tower Torre della Campanella and simply love the fact that you are alive and in Italy.