Layers of history in Rome

The eternal city. No place in the world is more worthy of that title. It feels like every corner of the city carries a story. As I roamed the hot alleys, I pondered at the layers of history.

I walked across the Roman Forum, across the ancient cobblestones where wagons once rolled past the marble palaces. In one corner I found the Curia, the old senate building, and marveled at the site with Lapis Niger in front of it. This black piece of marble contains one of the oldest known Latin inscriptions from 500 B.C. A stone’s throw away I walked past the place where Julius Caesar was burned and the wall where Marc Anthony held his famous speech.

Walked up to the Palantine Hill, said to be the founding place of the city, as well as the place where Augustus was born and raised. On the other side of that hill I gazed down on the site of ancient chariot-racing stadium Circus Maximus. So much history in every corner of this area.

The Capitoline Hill above the Forum was once the site of the large temple of Jupiter where Brutus and the assassins hide after the murder of Caesar. It was transformed by Michelangelo into a large piazza flanked by three palaces, and a large stairway leads down on the western side. 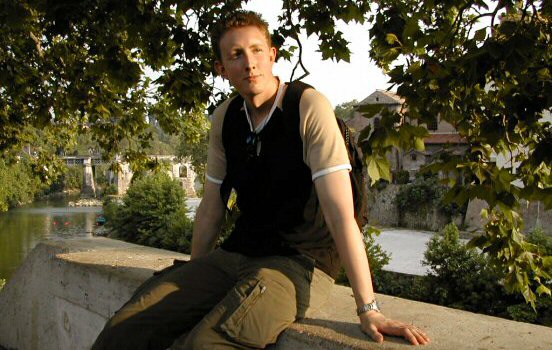 Hanging around at Ponte Fabrico, plotting the course for more gelato.

I crossed the Ponte Fabrico leading to Isola Tiberina. It is the oldest surviving bridge in Rome, built in 62 B.C. On the southern tip on the island, I rested a bit in the shade of a tree and listened to the sound of the Tiber river. The relentless flow of time.