Some cities are often closely associated with a landmark or historic location. Most people think of Rome if they see a picture of the Colosseum, the Eiffel Tower is the ultimate symbol of Paris and the Statue of Liberty is arguably the most famous landmark among many others in New York city. Even if they cannot place the city on a map, the landmark location is widely known due to depictions in media, movies, posters and so on.

But then there are some cities where the references are not crystal clear. Some may associate Turin with The Italian Job, the 1969 movie where Michael Caine and his merry British band perform a daring heist with ensuing car chase all over central Turin. The “chicken grab” scene outside Galleria Subalpina and the chase along Fiat factory rooftop racing track in Lingotto are silver screen classics. In the first scenes of the movie, Turin was introduced as “the industrial capital of Italy” with a black and white aerial shot of the Mole Antonelliana and Palazzo Madama.

But the movie is over 50 years old (skip the remake from 2003), so a younger generation may think of other things. Such as chocolate and white truffle. I grabbed some Gianduia at the popular chocolate store La Bottega Guido Gobino and walked through the numerous arcades, lined by beautiful Baroque buildings.

I continued north and passed the cathedral of San Giovanni Battista, which holds the Shroud of Turin (probably the most legendary item associated with the city). But my goal today was something even older than the Shroud. I often feel that areas of archeological remains is where I go to search for the soul of a city.

Next to the cathedral is the Parco Archeologico Torri Palatine, an area with old Roman ruins. But unlike Forum Romanum in Rome, where you have to pay for a ticket and queue for hours before getting in, this area is both free and empty.

I stepped across the beaten grass along muddy paths, while a dog owner was walking his four-legged friend who unashamedly urinated on top of a two-thousand year old wall ruin. 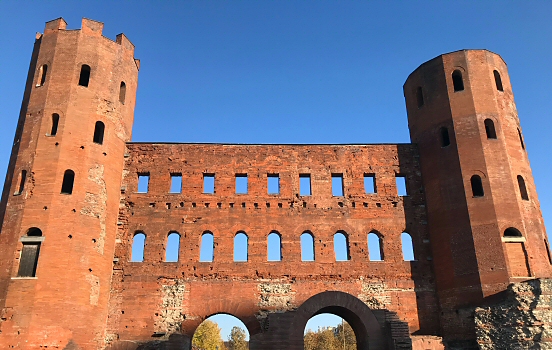 At the far end is the Porta Palatina, said to be the best preserved Roman Gateway in the world from the 1st century. It is flanked by statues of Caesar and Augustus, and I wonder what they would have said of the derelict state of the buildings.

As I walk through the totally unprotected gateway, past ugly graffiti and empty beer cans, I cannot fathom how such an archeological treasure is kept totally unshielded from weather, wind and the general public (and their dogs).

To add insult to injury, the area is split in two by a railroad for trams. The Roman amphitheatre (Area Archeologica del Teatro Romano) is on one side and Porta Palatina on the other. 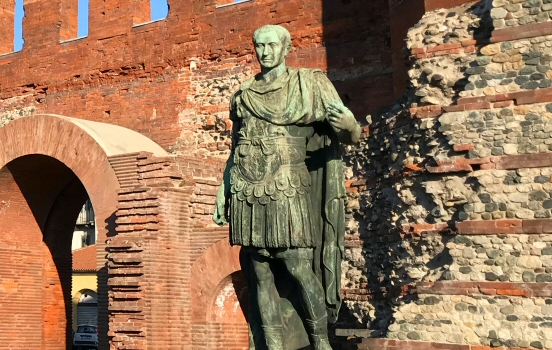 Julius Caesar is still keeping an eye on things.

I’m sure there is some kind of explanation behind it, such as the road Via dei Fori Imperiali built by Mussolini that cuts straight through the Forum Romanum ruins in Rome, but I still feel sad for the devastation of history as exhaust fumes and vibrations continue to damage the surrounding ancient Roman monuments. 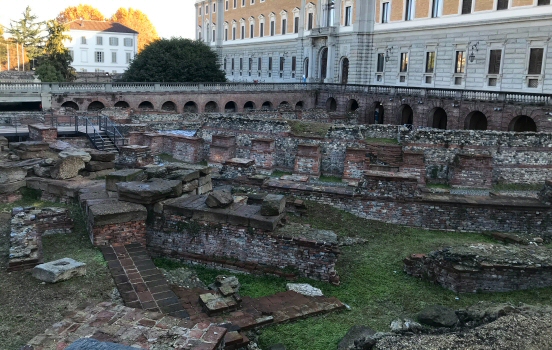 While escaping the cold by going into the classic Caffè Fiorio and ordering a lovely Bicerin, the traditional coffee&chocolate hot drink native to Turin, I ponder what makes a city well-known in other minds and how it can be changed during the years.