What do you know of Slovenia? The country is quite secluded despite its colorful neighbours. Slovenia is known for having great castles and caves, as the latter are some of the largest in Europe. But to me, the country is the home of controversial band Laibach, based in the nearby town of Trbovlje. 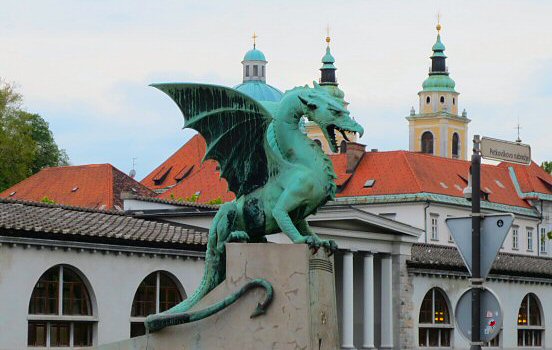 The Dragon Bridge in Ljubljana.

Even though I’ve been listening to them on and off since 1990, they are very far away from the mainstream genre. When I last saw them live some years ago, I liked it a lot but a friend (who is generally very open to new music) commented that “they sucked whale balls”. Whatever that means, it’s certainly not something good. The band recently got a place in the spotlight for making the soundtrack to the movie Iron Sky, but I wouldn’t call them “mainstream” by a longshot. Their new album Spectre was released a month ago and with the recent Russian invasion of Ukraine, their music feels more up to date than ever.