3D cities in your browser

Over a decade ago I was making my thesis project about dynamic modeling of 3D buildings in urban environments. Me and a friend were taking photographs of buildings in central Gothenburg to use them as textures in a custom rendering engine written in C++. The available data consisted only of ground-level coordinates, not heights or textures.

Some years later this area has seen some progress, to put it mildly. Google Street View and similar techniques are mainstream by now, and recently the Swedish site hitta.se was blessed with a 3D view. By running a simple Java applet in your browser, you can zoom, pan and rotate the city while exploring street turns and roof constellations only known by birds until now. 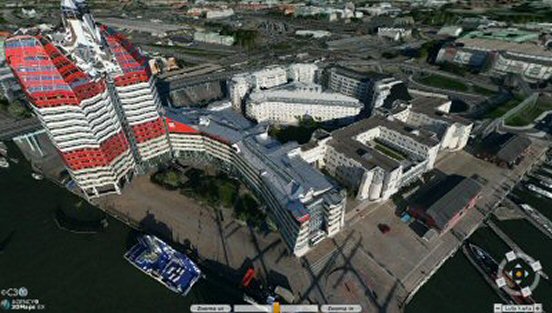 3D view of my former workplace building in central Gothenburg.

The 3D models are created by C3 Technologies in Linköping, with technology previously used for military terrain analysis in missile guidance. Cars with eight cameras have been rolling through the streets, shooting in all directions. Groovy algorithms then extracted heights by analyzing the photos and created the 3D environment. Sweet.