This would be a night to remember.

We arrived at Guarulhos, the international airport of Sao Paulo, in the afternoon. To our surprise the aircraft had already left.

The Air France office was already closed at 5 pm so we had a look at the Air France web site, that referred us to a 24/7 telephone number. That led us in turn to an answering machine, saying that the service was closed and any questions were referred to the web site. This means that at the moment no one on the entire planet was available for global customer support. We interrogated an information office for another company which kindly informed us that Air France had simply missed the fact that Brazil didn’t adjust daylight savings time today due to the election, so the airline’s clocks were wrong.

Varig managed to squeeze us in on a flight to Europe five hours later, so with a purchase of the latest issue of Empire magazine we were finally going in the right direction. 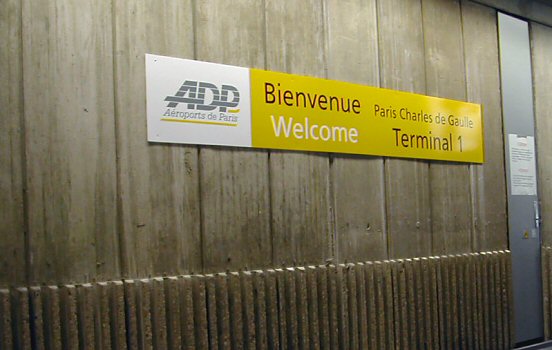 Welcome to Charles de Gaulle Terminal one. You can check out anytime you like but you can never leave.

Next problem arrived soon after the touchdown at Charles de Gaulle in Paris. We saw Nasseri‘s red bench on the ground level of Terminal 1 and took a bus to Terminal 2F. We went to the information desk, where a very sleepy girl directed us to the ticket office. The ladies at the ticket office told us to go to the transfer desk. With sore feet we finally arrived at the transfer desk. The woman behind the counter stated, in a very unfriendly manner, that our tickets were wrong.

“But it was Air France who made the mistake.”
“Ce n’est pas possible, monsieur”.

She even refused to recognize the stamp “Air France” all over our tickets. Sigh.

My friend tried to negotiate with the hostile employee, while I focused my mind on the old Jedi trick, “these are not the droids you are looking for”. Finally we got new boarding cards for the transfer flight, even though they were to Amsterdam instead of our destination Gothenburg. Well, anything to get out of this airport… But the luck would not last for long. After a couple of boring hours at CDG and another flight we arrived at the Schiphol airport at the outskirts of Amsterdam. Raced along the endless corridors and boarded yet another plane, this time with the correct destination.

In a moment of hubris, I paraphrased Darth Vader, “there is no one to stop us this time”.

How utterly naive of me.

“This is your captain speaking. We have a slight problem with a light on the aircraft. This will take approximately fifteen minutes.”

“This is your captain speaking. The problem appears to be located inside the cockpit. It may take awhile.”

We waited another thirty minutes.

“This is your captain speaking. Fixing the lamp is quite a problem, so we have decided to switch aircraft.”

Thus initiating the exodus of hundred people across the vast Schiphol airport to another gate. After an entertaining hour at glorious gate 89 a new plane arrived.

At midnight local time, after 26 hours of travel, it was finally touchdown on native soil. However, the airline had prepared a final gift for me by not sending my luggage. So I walked out of the airport into the cold night, wearing only a t-shirt in seven degrees Celsius, without even my apartment keys.