As the large tunnel project Götatunneln is taking form in Gothenburg, there are discussions on what to do with the large space along the water which will be rid of heavy traffic.

The waterfront area will most likely prosper as the road removal provides space for cafés, restaurants and the long awaited river walk. Most cities with a large harbor and a river dividing the city has some sort of river walk for relaxation and strolling, so it’s about time.

The most popular suggestion is a line of entertainment bazaars along with a tall tenant building. I happen to have a few suggestions of my own. How about an arch-formed building stretching across the river? It would be a interesting challenge from a architect-engineer’s point of view. It would also run circles around the Turning Torso in Malmö. Go ahead, Wingård. I double-dare you. 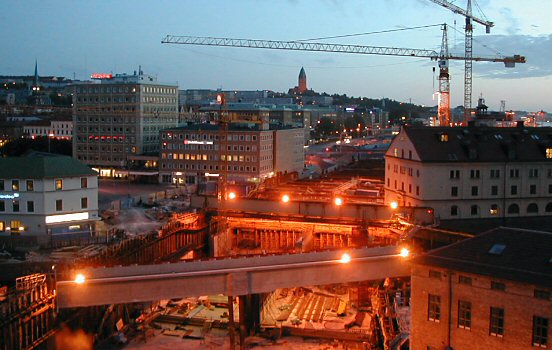 On a side note, I wonder what’s going on in Boston with their own project called the Big Dig, where a large tunnel is placed under the center of downtown. This will get rid of the Central Artery, an elevated six-lane highway being one of the most congested highways in the United States. I visited the area a couple of years ago, and there was a lot of work to be done. I suppose the North End and Waterfront neighborhoods will prosper in a way similar to the process in Gothenburg.