Khao San Road is one of the most infamous streets in Asia. I walked slowly through a hurricane of street vendors and clouds of fried food, while trying to dodge the crazy tuk-tuk drivers seemingly coming from nowhere.

It didn’t take long before I needed to get away from it all, so I resigned and hailed one of the tuk-tuks. The traffic of Bangkok is so insane that there is no point in being afraid, just go with the flow and hope that everything will be alright. But the odds of surviving feels slightly better being inside the vehicle, so it could be worth a few Bahts.

But soon the fumes and blue smoke exhausts got the better part of my lungs, so I managed to escape the infernal vehicle and walked rest of the way down to the Chao Phraya river. For the mere price of 15 bahts I left the pier in silence, crossing the murky waters. 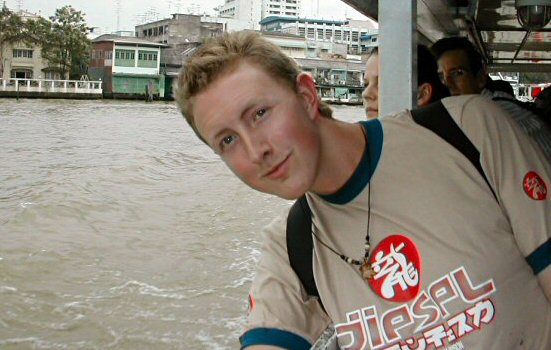 Going down the Chao Phraya river in Bangkok.
bangkok thailand