These are icy isolation times in Gothenburg. The temperature has been freezing for weeks and the pandemic threat of covid-19 is looming over us all.

As the days grew darker during the autumn and the dreaded “second wave” was hitting the rusty shores like a ton of bricks, one could still see people on the streets, friends socializing in restaurants and even some scattered souls in bars. But since the start of the new year, the city has been increasingly emptier by each day that passed.

To put it in context, this is despite the fact that Sweden has had very liberal regulations during the pandemic. I guess the meme “waiting for the bus like a Swede” found a new meaning. 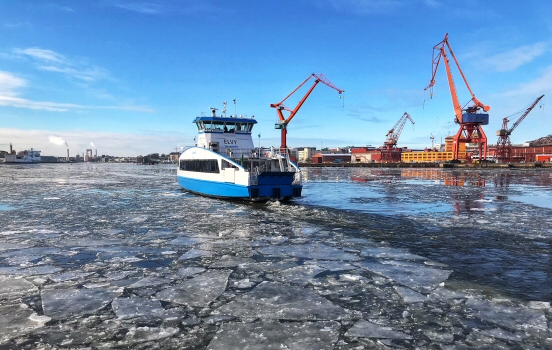 Local ferry westbound across the ice in Göta älv.

The other day I was walking past the harbor, where I saw the local ferry crossing the river. I’ve seen it so many times during several decades, but this time it stirred something in me. The tiny boat moved gently across the sheets of ice, careful yet deliberate. A stalwart vessel moving people onward through the cold, as if it wanted to be the train Snowpiercer.

Spring is coming and with it the vaccine is being rolled out around the world. Hopefully this will be the last of these moody corona posts, as we all steer across the ice toward a brighter future. Who knows, in a few years time maybe people will even start traveling again?