It has been almost a decade since my last visit to Budapest. Back then, ruin bars weren’t a big thing yet. The first of them, Szimpla Kert, opened up way back in 2002 but it really took off in later years.

It all started when creative people saw the use for old abandoned buildings in the 7th District. This area was once part of the Jewish ghetto, which was crumbling after the horrors of WW2. Soon others followed and alternative spaces started to appear all around the city.

At first it was feared that the so called ruin pubs would be shut down, but since they turned out to be so popular they survived. Today these crumbling water holes are among the most visited places in all of Budapest and offer a great variety of music, decorations and crowds. 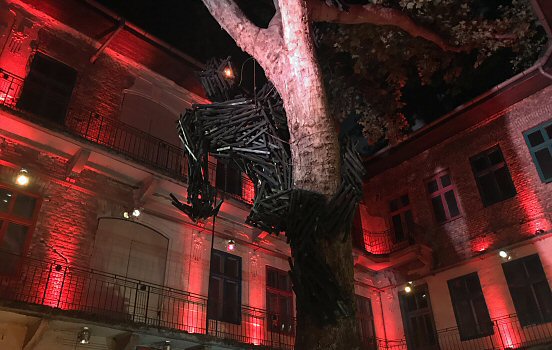 All hail Megatron at Doboz.

There are too many to mention, but Szimpla Kert is a great start. Note that it is quite large, so be there early to scout the premises. Then move on to Doboz (the one with the evil red-eyed robot in the tree), Fogas Ház, Instant, Red Ruin and many more.