That infamous piece of pulp literature by E. L. James may have fifty shades of them, but Lima seems to be eternally shrouded in one kind of grey. The mist along the cost is so common that the Spanish word for it, la garúa, has come to be synonymous with the fog off the Peruvian coast.

It seems that the garúa covers Lima for about five months a year. It’s simply a result from the interaction between the inland desert winds and the cool water from the Pacific, including the cold Humboldt Current. London is a notoriously foggy city, but Lima has only one fifth of London’s annual sunshine hours in comparison!

Even the author Herman Melville made a famous remark after a visit to Lima in 1844 as a crew member on the USS United States.

“It is not these things alone which make tearless Lima, the strangest, saddest city thou can’st see. For Lima has taken the white veil; and there is a higher horror in this whiteness of her woe.”
— Herman Melville, Moby Dick (1851)

The Limeños must be dead tired of the humidity and cloudy skies. 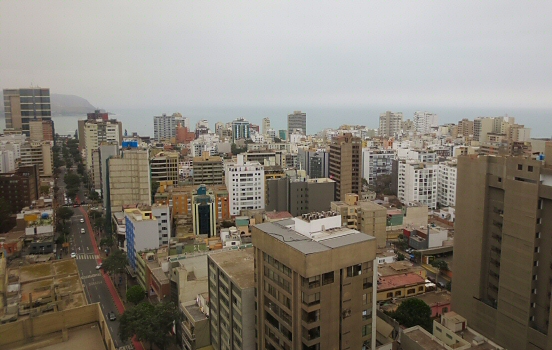 The grey skies of Lima from 21st floor.

Lima is the second largest city in South America with almost nine million citizens. The sound of endless honking from the car-clogged streets follow me everywhere I go, even when I’m having a risotto by the window on the 21st floor. As do the mist.

But there is some glimmer in the darkness. The historic center of Plaza Mayor is quite beautiful, flanked by several beautiful buildings. I enter the cathedral which was constructed in the 16th century. Among other things I have a look at the tomb of Francisco Pizarro. The butcher/conquistador was murdered in Lima 1541 and the tomb is protected by a large iron fence.

Another place with connection to the dead is the Basílica de San Francisco, where I visit the catacombs and walk among endless amounts of bones. The ceiling is very low so I have to walk hunched for a long time. It’s a quite large place and they are still excavating the tunnels down there.

So far I’m quite underwhelmed by both the climate and the food in what is called South America’s culinary capital. But I suppose things can only get better.