Greetings from San Sebastian in the Basque country. I’ve been to Spain many times before, but this part of the country has always eluded me. Situated in the north of Spain in the Bay of Biscay, San Sebastian is probably the best known of the Belle Époque resorts along the coast.

Geographically it reminds me of Rio de Janeiro, with curved beaches intertwined between tall hills. One of the hills even has a statue of Jesus, to further add to the similarity.

Everybody says that the best food in Spain is in San Sebastian, so of course I had to try it. It is supposedly inspired by the French, but still Spanish at heart with the inclusion of excellent seafood.

The basque tradition is to do a pintxo crawl, that is having one or two pintxos (similar to tapas) before moving on to the next tiny bar. Not too bad to wash it all down with a local Txakoli, the young white wine typical of the Basque country. 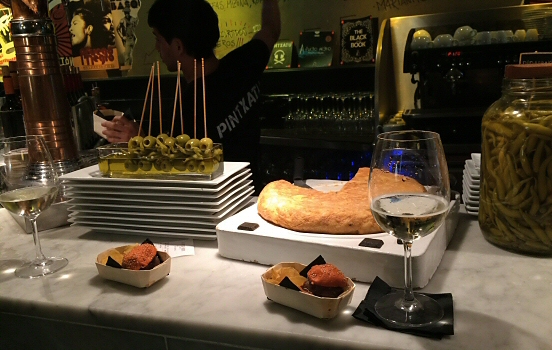 The famous Makobe burger at A Fuego Negro was tiny but delicious.

Some of the places are really tiny. One of the smallest I visited was La Cuchara de San Telmo up on a corner of Santa Korda Kalea. The place was featured in the TV series version of A Cook’s Tour from 2002, where Anthony Bourdain had a carrilera de ternera al vino tinto. I manage to grab the table where Bourdain had his meal and ordered the same. (Yes, it’s border-line obsession but never mind.) 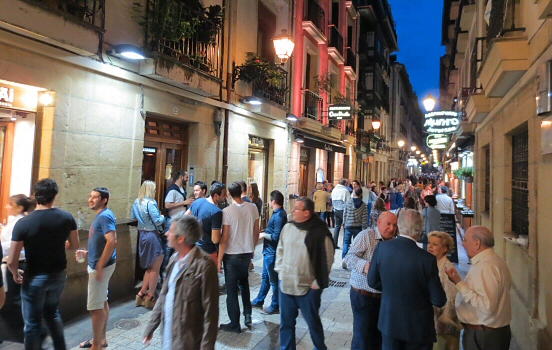 The alleys of Parte Vieja are always crammed in the evening.

The best part is that the pintxos are so darn good, regardless of where you go. I probably would need a year or two to properly sample the dishes in this town.