The controversial independence voting in 2017 led to the exile of Puigdemont, but the drums were definitely not silenced. A few days before my arrival I read in the papers that nine of the separatist leaders were sentenced to jail for the separation attempt of 2017. This caused an outcry with protests and street violence. After several nights of violent protests in Barcelona, the riots culminated today at about the same time that my flight touched the tarmac.

I managed to find a taxi, but the young driver was too scared to get close to my hotel in Eixample. He was on the phone with other drivers in the city, who described the area as a war zone. I got messages that there were fires outside my hotel with policemen firing rubber bullets on masked rioters.

There I was, a lonely guy with a suitcase. So I started walking. As I got closer to the hotel on foot, I was unsure of what I would find when I got there. Angry young people passed me in the other direction and the air was a bit tense with the sound of sirens and police choppers. Fortunately the worst had passed shortly before, and the hotel personnel unlocked the front doors just minutes before my arrival.

A few minutes later, as the mist cleared.

It definitely feels like the region of Catalonia looks more towards Northern Europe than Madrid. The Catalan language is co-official in three autonomous communities of Spain, but in Barcelona it is everywhere in menus and road signs. The balconies are filled with different kinds of flags, a free and non-violent way of expressing a political and social opinion. One of these is the blue star of the Catalan Republic. 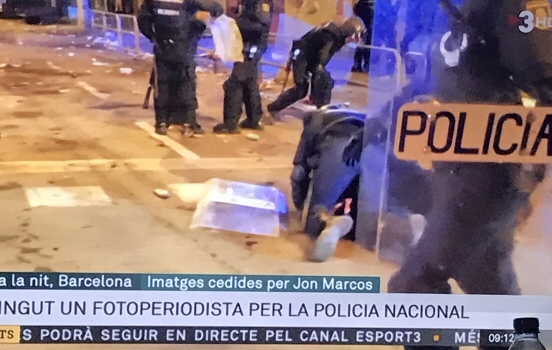 With independence movements on the march in many parts of Europe, it will be exciting to see what happens in the next years.