After being stored in the valley during the winter, the wine used to be shipped in barrels on flat-bottom boats called rabelos down the Douro Valley to Vila Nova de Gaia in Porto where they are stored in cellars of the various wine houses.

I’ve been following in their tracks, going by a rabelo boat on the Douro and sampling various port on quintas (vineyards) in the Douro Valley as well as in the traditional wine cellars of Vila Nova de Gaia.

Wine used to be transported in barrels which led to a decrease in quality during the long journeys. So they added a bit more alcohol to the wine and thus the early (dry) ports were born. 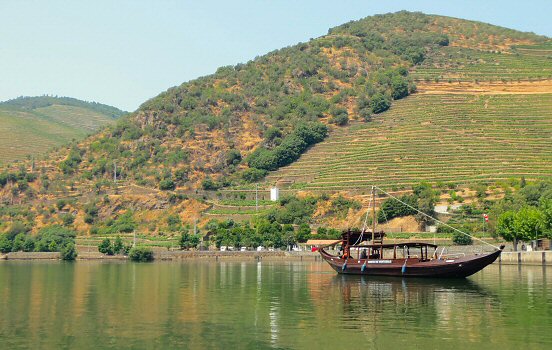 A rabelo boat on the Douro river.

The Douro area is perfect for wine-making. It is protected by the mountain range Serra do Marao which lessens the precipitation, making way for cold winters and hot summers. The soil is made up of schist rock, rich in nutrients. And of course it’s all very beautiful with the Douro river carving its way through the hills.

No wonder that people have been making wine here for two thousand years.