Deserts are a magical place where you can find things that you wouldn’t expect. They are also areas that attract a certain kind of people, who are able to endure and even thrive in the open wastes.

Slab City is an off-grid community near the Sonoran Desert. The name “slab” is derived from the concrete materials that remained after a large Marine Corps training camp was dismantled in the 1950s.

It’s considered a squatter’s paradise, where people can disappear into nothingness. But some ingenious people choose instead to create and build. We met Frank Ross, a free spirit who runs an internet café (of all things) and provides free coffee to his guests. We sat down for a chat with Frank and his friends. He had lived in Slab City for twelve years and built his own electronics equipment using car batteries. He was very pleased with not having a postal address, completely off-grid. 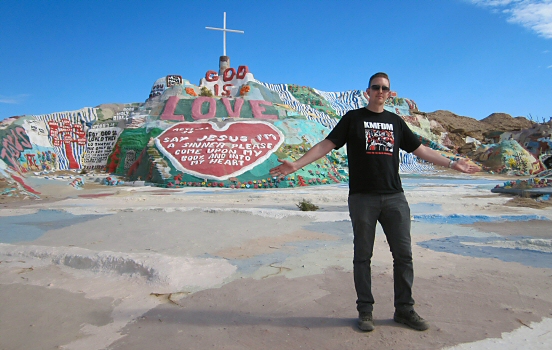 Your own Personal Jesus.

Another colorful part of the area is Salvation Mountain, and I do mean it literally. Leonard Knight has spent 30 years of his life to create a mountain out of adobe and paint. He worked day and night, and slept in the back of a truck. Leonard and his creation was featured in Sean Penn’s movie Into The Wild (2007). Unfortunately he was put in a hospital last year, so we explored the mountain area in silence without meeting anyone. 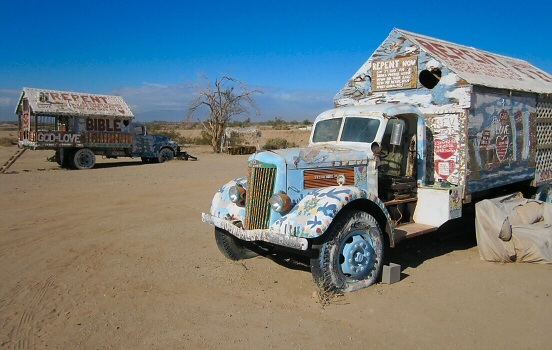 We drove on into the wasteland and find a strange place called East Jesus, where Charles Stephen Russell has made art installations from a garbage heap since 2006. A friendly chap in a nice top hat appeared from nowhere and gave us a tour of the area. 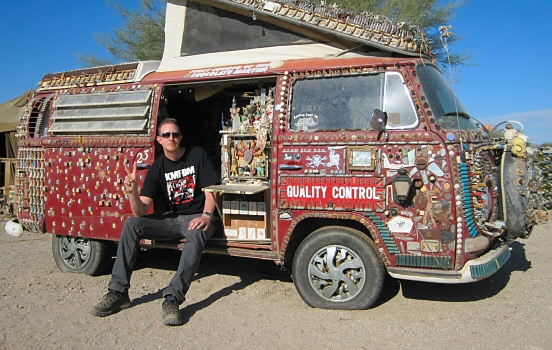 Among other things I saw a mammoth created from car tires, a grave cross consisting of computer keyboards and a wall of TV:s where not so sublime messages had been sprayed across the screens. 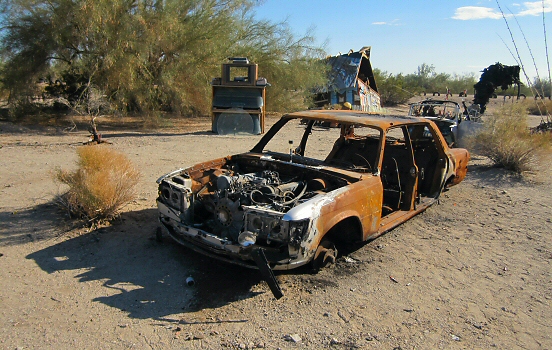 “It’s better to burn out than to fade away.”
After a dodgy burger in Niland, we head west on Route 10. As we pass the towns of Palm Springs, White Water and Sky Valley I come to think of the band Queens of the Stone Age. They have a ranch north of Sky Valley, where they record music and arrange the legendary desert sessions.

Some artists stay at fancy hotels in downtown Los Angeles, surrounded by fans, clubs and overpriced lattes. Others choose to live out here, with the lonely wind as their muse.