“Los Angeles, November, 2019”. That is the opening text for the classic movie Blade Runner from 1982.

Well, this is Los Angeles 2012, and I guess that replicants and flying cars are simply not going to happen within 7 years. But I digress.

We have arrived at Bradbury Building, the 1893 building in downtown Los Angeles. The epic finale of Ridley Scott’s masterpiece was partially filmed here. The elevators, stairways and iron railings are easily recognized even though the building was completely renovated in the 1990s, and the entrance used by Rick Deckard (Harrison Ford) has today become a Subway restaurant. 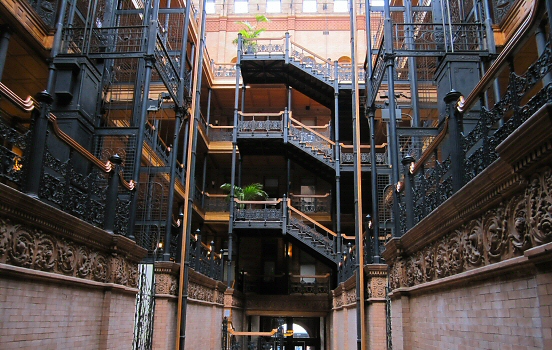 The interior of Sebastian’s apartment was a set built in Sound Stage 25 at Warner Bros, but we still insist on exploring the building by using the old elevators. The security guard was not amused. 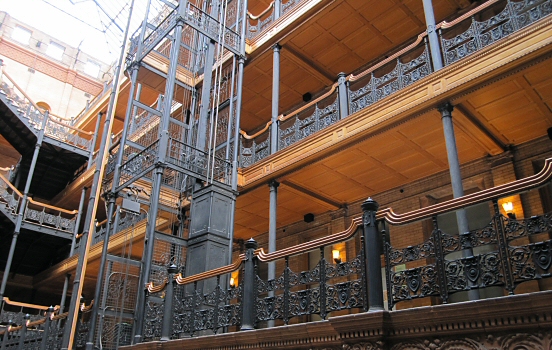 The elaborate elevators are still working.

Apart from the Bradbury Building, there are other Blade Runner related material nearby. As you walk outside the building, you will find the Million Dollar Theater, which can also be seen in the movie. Unfortunately the big pillars were only part of the movie set, but it’s still cool to see the neon sign of the theater.

Just across the street is the Pan-Am Building, which was used as the “Yukon Hotel” in the movie. It was also featured in Constantine (2005), where it was the apartment of John Constantine. You can glimpse the exterior of the Bradbury from Constantine’s window. For another reference, the building was also the house where the comatose “sloth” victim was found in Seven (1995).

A few blocks to the north is the Second Street Tunnel, where Deckard can be seen driving home.

A long walk further to the east is the Union Station, where the waiting hall was redecorated to be the police station in Blade Runner. The office of Bryant (M. Emmet Walsh) was temporarily built inside the waiting hall. 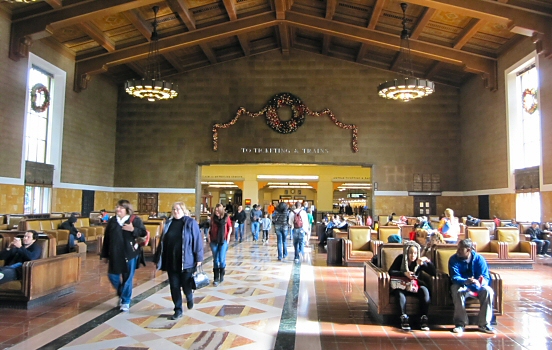 Even more further away is the Ennis House at 2607 Glendower Avenue, located on the slopes below the Griffith Park Observatory. This concrete Mayan temple-style home by Frank Lloyd Wright was used as Deckard’s apartment block in Blade Runner. It was also used as the home of mob chief in Black Rain (1989).