In the movie A Room with a View from 1985, Helena Bonham-Carter gazes from her window at Hotel degli Orafi towards Ponte Vecchio. But I would say that this is a City with a View, since almost every corner could be featured on a painting.

From the imposing Palazzo Vecchio to the impeccable Duomo, from the statue of David to the masterpieces of Botticelli. The works of past masters are ever present in the city of Galileo, Dante and Michelangelo. I could spend years here without seeing everything on my bucket list. 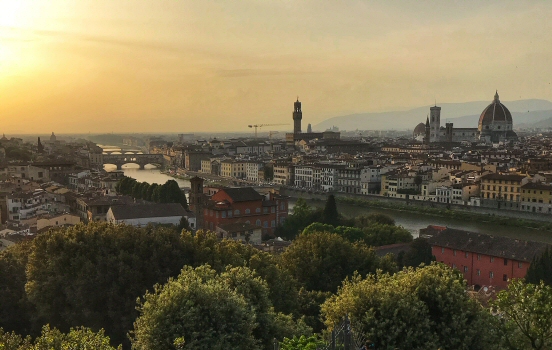 Sunset over Florence from Piazzale Michelangelo.

I sat down at the Loggia dei Lanzi to rest my weary feet, surrounded by statues and sculptures. The famous Perseus holding the Head of Medusa is looking down at me with disdain. This is another famous location from the previously mentioned movie, where Helena Bonham-Carter recovers from seeing a knife fight in the piazza. 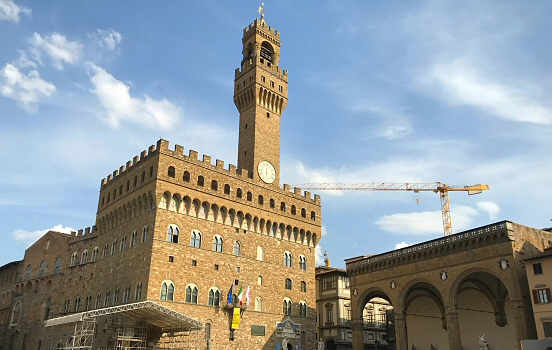 The imposing Palazzo Vecchio next to Loggia dei Lanzi.

In addition to the obvious masters, one of the most famous names from Florence is of course Dante Alighieri. The Casa di Dante is not his actual house, but a reconstruction in the area where he lived. It is next door to the Santa Margherita de’ Cerchi church, allegedly the place where he first met Beatrice, as well as the location of her tomb.

Just a few blocks to the north, there is a small alley next to the Duomo. Dante wrote that he used to sit on a stone here in 1291 and think of her, as she had passed away the year before. Today a symbolic stone has been placed on the spot, together with an inscription.

However, for a movie buff such as myself, one of the main attractions would be to see Dante’s death mask which is kept inside Palazzo Vecchio. It’s also highly featured in the Dan Brown novel Inferno, as well as the movie from 2016 with Tom Hanks. For more movie locations in Florence, see Movie locations around the world part 7. 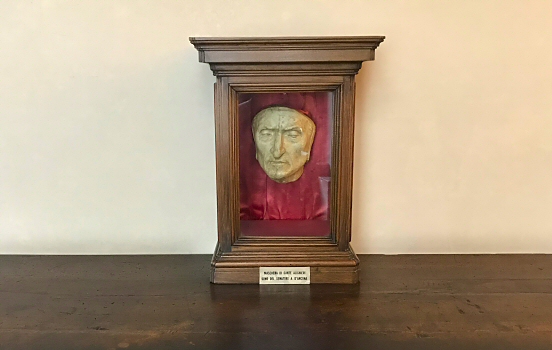 Another masterpiece is the medieval stone bridge Ponte Vecchio spanning the river Arno, near the Uffizi gallery. The humongous two-story bridge itself feels wider than the river. As Mark Twain noted in 1867:

“It is popular to admire the Arno. It is a great historical creek with four feet in the channel and some scows floating around. It would be a very plausible river if they would pump some water into it. They all call it a river, and they honestly think it is a river, do these dark and bloody Florentines. They even help out the delusion by building bridges over it. I do not see why they are too good to wade.”
–Mark Twain (1867)

I have wandered down narrow streets, trying to fully take in my surroundings with regards to sights, smells, sounds and taste. Oh yes, taste! The food and wine of Tuscany is second to none.

“I ate his liver with some fava beans and a nice Chianti”, as old Hannibal Lecter once put it.

But I prefer gelato and prosciutto, fortunately enough. Fear not, dear Italians. Godzilla is not here to eat you.