It was bloody cold, so I understand why Alphaville wrote a song about “summer in Berlin” instead of this season. We met old friends, visited strange bars and fought the bitter cold with Glühwein.

As usual we had to go on bunker safari! Took two guided tours down to the Berlin underworld which gave some perspective on the bombings during the later part of WW2. The air-raid bunkers were once packed with people and some rooms had luminous phosphorus paint on the walls, original since 1940 and slightly toxic. We also visited underground shelters which were constructed during the Cold War as protection from nuclear attacks.

The nearby Flak tower in Humboldthain Park was one of several anti aircraft towers constructed in 1941. There is a tour available descending down into the partially-collapsed structure, but unfortunately it is only open during the summer season since the tower is inhabited by bats who hibernate during the winter months. 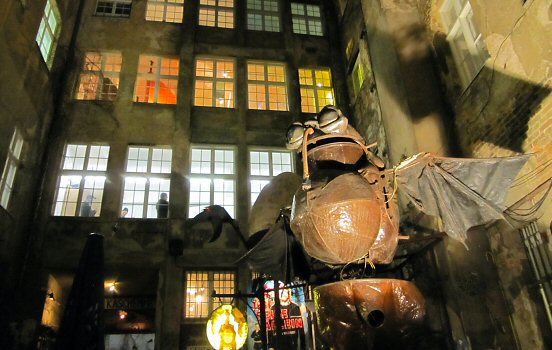