The BBC travel shows with Michael Palin are among the most well-produced mainstream narratives out there. Many of them are also available in book format. This one describes a lap around the Pacific Ocean, a quite original itinerary. 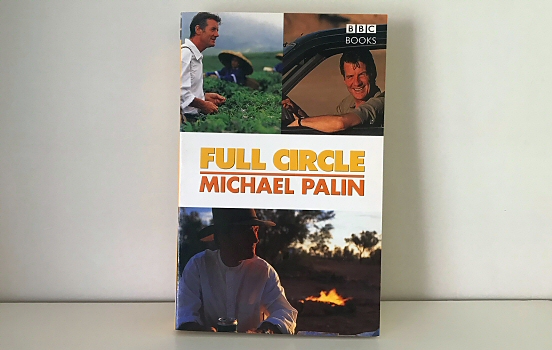 He starts in Alaska, makes his way down eastern Russia to Japan and passes Australia before reaching South America, starting the long way up to Alaska again. The trip covered 50 000 miles in 270 days.

I found this book long ago in Brighton and since then I’ve come back several times to reread some of the chapters when I was about to travel the same way as he did in a particular chapter, such as the ferry passage across the Korea Strait or driving along Highway 1 in California.

Since he travels with an army of crewmen, the authenticity is sometimes on the same level as Mariah Carey visiting an African village in high heels. But Palin mostly makes up for it by using his dry British humor and charming demeanor.

For instance, another interesting series is his Sahara excursion. The following clip is from an episode where he boards a two kilometer long train to cross some of the desert.

As you can see it is not exactly a mainstream tourist destination, but at least he gets on the train. I would love to go on this train as well, but I suppose it wouldn’t work as smooth without being a celebrity followed by a team of cameramen.