This is the classic eye-witness account by Jon Krakauer of the tragedy that unfolded on the slopes of Mount Everest in 1996. I read it about ten years ago and recently got inspired by an adventuring friend to re-read it. 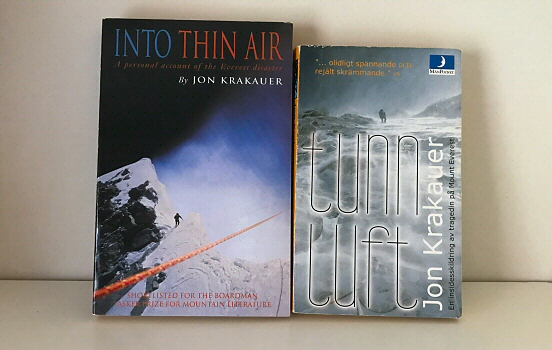 Since most of the story focus on Mount Everest, it’s not a travel book in the traditional sense. But he initially describes a bit of trekking in Nepal and I would say that 8000 meters up in the air is also a fair bit of traveling, even though it’s a vertical journey.

The weather in May holds a precious window of opportunity for aspiring Everest climbers, so there were lots of different teams of climbers present on the mountain at the same time. Krakauer was part of the team Adventure Consultants led by the well-known guide Rob Hall from New Zealand. Other teams were Mountain Madness led by the charismatic American Scott Fischer, an IMAX team lead by David Breashears and several more.

But as the teams were struggling to reach the summit, a fierce thunderstorm caught them by surprise and turned their plans into mayhem. Krakauer was originally hired to write a short article for Outside magazine, but the hours to follow turned out to be more intense and dramatic than anyone could imagine. When the storm had passed, eight climbers were dead.

Climbing Mount Everest is certainly no picnic. Even expert climbers are not safe up there in the “death zone” above 26 000 feet. As one of many tragic testaments, the frozen corpse of Scott Fischer is still up there on the mountain ridge today, fifteen years later.

Also present on the mountain during those ill-fated days was the Swedish adventurer Göran Kropp. About the same time as my first read of Into Thin Air, I also read the book 8000+ about Kropp’s adventures. In 1996 he traveled by bicycle from Stockholm to the Base Camp at Mount Everest, and thus happened to be present during the events described by Krakauer. Kropp then swiftly proceeded to climb Everest without supplemental oxygen! This was an extraordinary feat and Krakauer describes how other climbers including Hall and Fischer were cheering at Göran on his epic struggle upwards. Since he happened to be in the area at the time, the tragic events are mentioned in his book as well.