The name of Hiroshima will forever be connected to the horrible event in 1945. On August 6, the first nuclear bomb to be used against mankind detonated 580 meters above the city, killing hundreds of thousands of people.

The detonation occurred above an exhibition building with a beautiful green dome that was completed in 1915. Most of the walls managed to withstand since the blast wave came from directly above, but almost every other building in Hiroshima was erased. Today the remaining ruin of the building is called the A-bomb Dome. 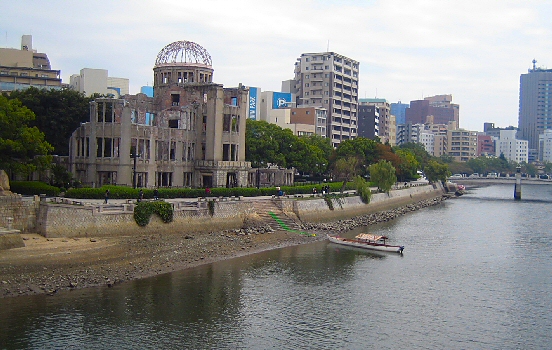 The remains of the A-bomb Dome.

I walked alone in silence through the lush Peace Memorial Park, an area that was once the busy downtown district of Hiroshima before the bomb. Several school classes are roaming the park and some of the children rang the large Peace Bell. I passed the Children’s Peace Monument, statue of Sadako Sasaki and the eternal fire before arriving at the Hiroshima Peace Memorial Museum. The museum was very informing and educational, but the sad gloom makes it a tough visit. 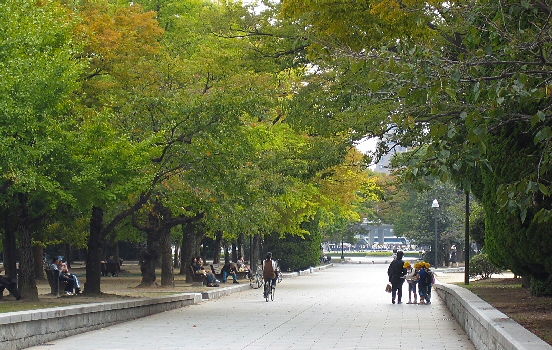 To get some air and uplifting spirits, I joined up with friends and took a ferry to the Miyajima island, south of the city center. Miyajima has been worshiped as a divine island since ancient times. We arrive at the Itsukushima Shrine which was first built in 593, then rebuilt in 1168. It was built on the seashore where the tide ebbs and flows.

The most recognizable part of the shrine is the red torii gate, partially submerged at high tide. Except for perhaps Mount Fuji, this is the essential image of Japan. 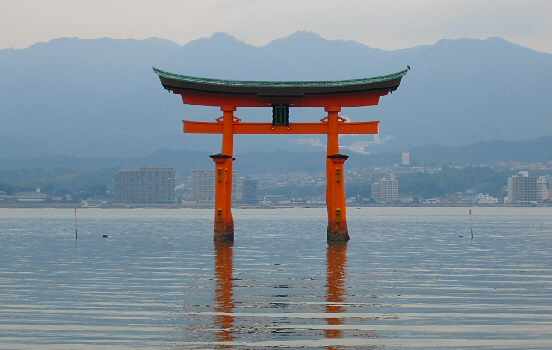 The gate has been on the site since 1168, but the current incarnation dates back to 1875. As we went down to the beach for mandatory “international karate” posing, a few curious deer were following us around and tried to snatch goodies from our bags.

After sunset we climbed the hill up to the imposing Senjokaku Hall, where the red roof of the five-story pagoda glimmered in the last rays.

As the night falls, we walked along the small alleys and sampled the local waffle cookies.