Some people might call me a movie buff, but today was one of those days it could be justified. I have walked alone in the streets of Kyoto, visiting temples and shrines at a leisurely pace, following in the footsteps of Scarlett Johansson’s character from Lost In Translation. I even listened to the song “Alone in Kyoto” by Air on my iPod, featured on the movie soundtrack as the backdrop while Scarlett walks around.

It is a strange sensation to wander around in a Japanese town as a six foot four gaijin, a foreigner excluded from the language and everyday rituals that everyone within sight silently obeys. I love it.

To further increase my movie epitaph, I must admit that one of the temples visited was the Nijo-jo castle, built in 1603 as the residence of the first Tokugawa Shogun, Ieyasu. For all of us who remember the Shogun TV-series and the old ninja movies with Sonny Chiba, this is holy ground.

The palace looks like a fortress with a moat surrounding the huge stone walls. To protect the compound from assassins, all hallways are equipped with “nightingale floors”, making a high-pitched sound when anyone steps on it. I tried my best to sneak across the building, but the floor revealed me each time. I suppose I would make a lousy ninja. 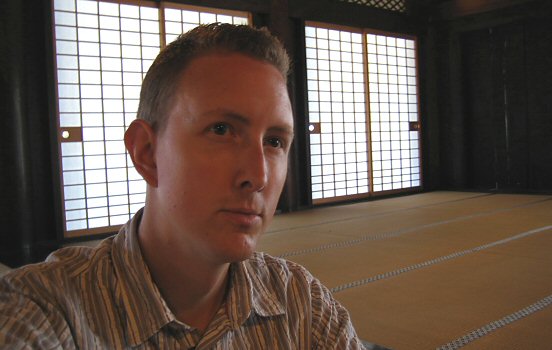 A moment of reflection in Nishi Hongan-ji temple.

Update: A few days later in Tokyo I “happened” to visit the Lost In Translation bar at 52nd floor of Park Hyatt, as well as the same karaoke place that was featured in the film (Karaoke Kan in Shibuya). Guess I’m addicted to that movie.