The Isle of Skye is one of the most remote areas of Scotland, with the Hebrides archipelago around the corner. Despite narrow roads on hillsides with sharp turns and the occasional sheep on the road, it’s quite lovely to explore the island by car. The countryside is charming and some places even have coffee.

The road signs are written in both English and Gaelic, since 30 percent of the population speak the latter language, and I had a hard time trying to understand several of the locals. Especially after a wee single malt.

The scenery is nothing short of spectacular and we climbed several hillsides for unparalleled views, including having breakfast next to the Old Man of Storr.

Sheeps and a windy road. Welcome to Skye.

The island is also home to the Talisker distillery, producing one of my favorite single malts, as well as the imposing basalt pillars at Staffin on the east coast.

Historically, the island is also known as the place where Bonnie Prince Charlie fled after the Battle of Culloden in 1746, disguised as an Irish maid. 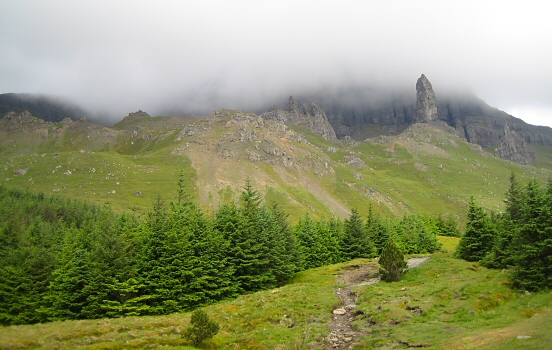 The ferry from bug-infested town of Mallaig is quite a short ride, but if you got time I strongly recommend taking the toll-free beautiful Skye Bridge.

As they say, the Skye is the limit.