Today, the WWDC 2007 was held in San Francisco and the keynote was delivered by Steve Jobs. I followed the transcript live by MacRumors thanks to a blogger in the audience, and afterwards the keynote was made available as Quicktime stream (check it out, and don’t miss the blunt Ballmer bashing).

Naturally, there was a lot of talk about Leopard, the upcoming version of Mac OS X, as well as iPhone which will be released on June 29th. Cool but predictable. The one thing that really woke me up was this:

The Safari browser is now available for Windows in a beta version.

Unlike Roger, I had no trouble with the installation and Safari worked perfectly on my Windows machine. In fact, it runs quite fast.

Apart from the expected annoyance of bundled installation of QuickTime, as usual with Apple products, I have a few issues. Most say the interface is slick and stylish, but to me the user interface feels like Netscape anno 1998. Naturally my eyes are affected by all other Windows applications I run simultaneously, but still. Since it is being run on Windows, the GUI inevitable get compared to the other GUIs on screen. I have no deep love for Windows GUI style either, but I’m a big believer in design consistency. It feels like the Safari team has gone go extreme lengths to make the Windows version identical in look and feel to the Mac version. Even the typeface feels like you’re running a Mac, until you press Alt-Tab. We all love brushed metallic, but now it feels like cramming a Porsche into a parking lot filled with Volvos. 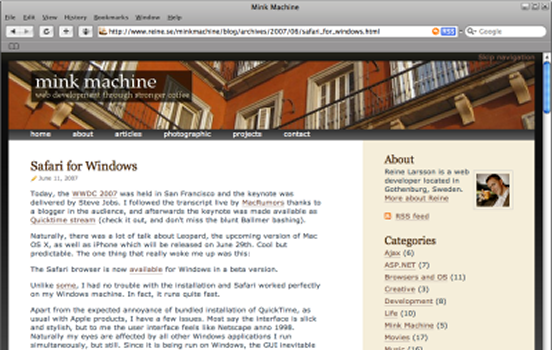 How does it differ from the Apple version? And I don’t mean the interface and features, but rather standards compliance and CSS rendering under the hood using same WebKit as the Apple version. Haven’t seen any closer inspection yet, which is understandable since it was released two hours ago, but it will be interesting to make a comparison in the near future.

Personally, I won’t jump over the fence in the predictable future. I love my iPod and loathe my iTunes. Safari is firmly placed somewhere in between those extremes, but it will be handy for previewing front end code in yet another browser on Windows.

Nevertheless, if you are a web developer in any possible way, I strongly urge you to download the beta and take a look right now.