I just got back from a Nine Inch Nails concert in Stockholm. It was so great I started to cry. But even more interesting than the concert is the marketing hype surrounding this tour.

It all started with letters in concert t-shirts from the current tour, spelling out a domain name: iamtryingtobelieve.com. A visit to this odd site introduces the mystical substance “parepin”, a fictional additive supposedly added to the water in the future. An email to the site owner results in a reply adding further information to the mystery of parepin.

There are clues leading to sites such as anotherversionofthetruth.com, churchofplano.com, 105thairbornecrusaders.com and many more, continuing the foreboding tale with “The Presence”, some sort of hand coming from the sky.

Other sources of information included USB drives deliberately left at toilet booths during NIN concerts in Europe, which contained a few new NIN songs and more. One of the new songs, My Violent Heart, ends with a small burst of noise. Running it through a spectrograph revealed this image, resembling the “Presence” hand. Eerie. 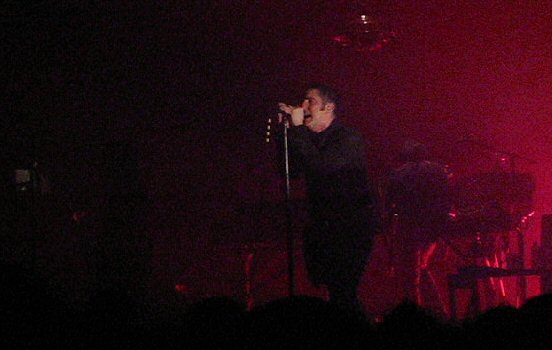 This idea is not unique in the music world. Even The Beatles, Led Zeppelin and Pink Floyd hid messages in album covers and song material. But I think this is one of the largest and most thorough plots I’ve ever seen.

All this is supposedly building momentum for NIN’s upcoming album “Year Zero”, and I would say that the intended interest has been achieved. The forum thread on the Year Zero project has passed 400 pages. I don’t know how much Trent Reznor has to do with all this, but it’s got his name written all over it.

And no, I didn’t find any USB drive.

Update: If you buy the new record, you will find that the cd print is black. Once it is heated, the black will turn white and reveal more cryptic messages.