45 years ago, a man named Martin Luther King stood in front of the Lincoln memorial and spoke to 250 000 people. He said “I have a dream” and today a part of that dream finally come true, as the first non-white president swears the oath on the opposite site of the National Mall with the Lincoln memorial in sight.

Truly a big day for the world. Yesterday was the birthday of Martin Luther King and today we are finally rid of one of the greatest warmongers in modern time. Regardless of what Obama will come up with, it can’t possibly be any worse than the eight years of the W (least popular president of all time according to polls).

But this is not about politics. Two years ago I wrote about Photosynth, a technique that combines 2D photos into a 3D spatial mesh. Today CNN urges people to send in their photos of the event during the day, which will be processed in Photosynth and assembled at The Moment-site. 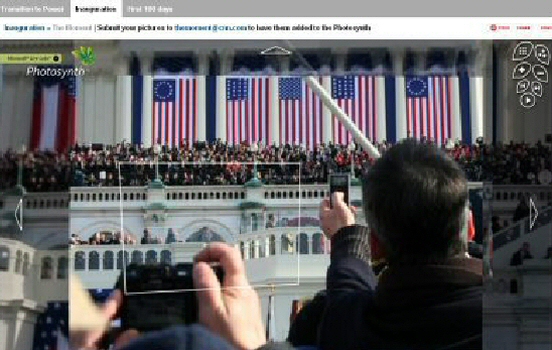 Photosynth mesh from The Moment, 24 hours after the inauguration.

It is a fascinating concept and it will be interesting to see how the result turns out later this day. Also interesting is how it collides with the plea from the telecommunication operators, who urges people to avoid making phone calls and image transfers (!) during the ceremony to keep the mobile net from collapsing.

Update: One hour after the inauguration, several photos are compiled at Microsoft’s Photosynth page.